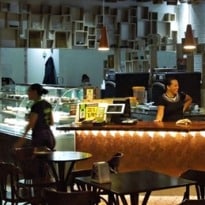 Bargain restaurants are harder to come by in remote Manaus, bang in the middle of the Amazon, where England kick off on Saturday. But we track down the tastiest and most affordable bites and bars for pre- and post-match refuelling

Within warbling distance of the Teatro Amazonas - the opulent opera house built with the spoils of the city's late 19th-century rubber boom - Bar do Armando is in the colonial heart of Manaus. Set in a listed single-storey building, with its façade painted salmon-pink, this no-frills watering hole is always packed with locals, both young and old. The best (plastic) seats in the house are out on the pavement, away from the bright fluorescent light and steamy temperatures inside. To drink, run-of-the-mill big-brand beers are served ice-cold in large 600ml bottles (Original is the best of the bunch), while to eat, the sanduíche de pernil - roast pork sandwich (R$15, around £4) - has won local awards, with thick slices of meat crammed inside a crusty roll. The good times here came to a halt for a while when the elderly owner Armando passed away in 2012. His daughter Ana Cláudia and her husband are now at the helm.
• Rua 10 de Julho 593, Centro, +55 92 3232-1195, facebook.com/BarDoArmando?rf

More than a simple street stall, Tacacá da Gisela is a permanent fixture in the square opposite the Teatro Amazonas, with ornate green columns and a smart tiled roof. Locals as well as tourists stop by for a fix of its eponymous dish - tacacá, a tangy broth and a popular street food, that will surprise even the most worldly of palates. Served in a cuia gourd bowl where dried shrimp, lip-numbing jambu leaves (a local herb) and gloopy manioc gum all swim about in a sharp yellow broth (tucupi) extracted from manioc root; ask for it "sem goma", if you're squeamish about slime. For extra kick, load up on the homemade chilli sauce - a blend of murupi chillies and tucupi. The owners, the charming Joaquim and his wife Rosa Maria, are there every day from 4pm-10pm, and invite a roster of local musicians to play bossa nova on Wednesday nights. Another popular place to try tacacá is at Tacacá da Tia Socorro, not far from the Fifa Fan Fest in Ponta Negra.
• Praça São Sebastião, Centro, +55 92 8801-4901, Facebook page

The eponymous Priscila started out with a cafe in the neighbouring town of Rio Preta da Eva, some 80km from Manaus, before expanding into the Amazonas state capital, where there are now six cafes carrying her name. They all serve up "café regional" - a standard breakfast menu found in most local market stalls and cafes, where Amazonian ingredients are transformed into all manner of juices, cakes, corn patties and toasted sandwiches. The largest branch of Priscila's, in Parque das Laranjeiras, is a no-frills, open-sided space on a traffic-heavy road, and a good way to kick start the day in local fashion. Sit near the flat-topped oven for a ring-side view of tapioca flour being melted into pancakes and stuffed with any number of ingredients; try Brazil nuts with slices of the bizarrely salty orange palm fruit tucumã (£5, serves three). The fruit is also wedged into a roll with cheese and banana in the x-caboquinho toasted sandwich (£2.50).
• Avenida Tancredo Neves 220, Parque das Laranjeiras, + 55 92 9171 3776

A bright, sparsely decorated, family-run peixaria (fish stall), Estória de Pescador has been gathering steam since it opened last August (prior to that, it just did delivery). Set opposite a school (Colégio Lato Sensu), in an upmarket, low-rise neighbourhood, the restaurant is a favourite with families, and school kids during the week. The lunch buffet (£9 all you can eat, or £12 a kilo) saves foreign clientele the challenge of deciphering the menu; grab a plate and just load up on the dozen or more local fish dishes, like pirarucu de casaca (shredded pirarucu fish baked with plantain and a topping of potato crisps) and fried tambaqui fish. In the evenings, mains on the à la carte menu start from £10.50 and serve two.
• Rua C 5, Quadra M, Numero 2 Adrianopolis, +55 92 36343758, Facebook page

Chain restaurants don't have to be awful, and Waku Sese is testament to that. What started out as a restaurant serving regional cuisine and frozen açaí - the Amazonian berry hyped with "superfood status" - in the bohemian neighbourhood of Vieiralves over 10 years ago is now a franchising hit. The formula: excellent açaí (it beats the competition hands down in local food awards) and bold branding that matches the berry's deep purple hue. At the kiosks, dotted around town, the frozen gloop is served in plastic cups (£1.80-£2.30); customers help themselves to toppings (chopped peanuts, cashews and crunchy tapioca flour balance out the sweetness). There are also three cafes and a restaurant (two in Manauara Shopping, one in Amazonas Shopping, and a pleasant street-level location with outside seating in Vieiralves) that serve hearty local dishes such as bean soup (£4.70), stuffed tapioca pancakes (£1.30-£3.70) and grilled fish - the roast matrinxã with rice, beans and farofa (toasted manioc with Brazil nuts and banana) is a good choice (£15.50 for 3 people).
• Rua Rio Purus 260A, Vieiralves, +55 92 3584 2792, Manauara Shopping G6, +55 92 3302.8519, wakusese.wix.com/wakuseseamazonia

While it's up there with the more expensive of the city's restaurants, Banzeiro deserves a mention for its sophisticated approach to Amazonian cuisine. Young chef Felipe Schaedler sources excellent quality fish - river giants like pirarucu and tambaqui - and serves them simply but impeccably. You can push the boat out, ordering starters (the fried squares of tapioca with a tangy cupuaçu fruit and murupi chilli jam are a delight) and pricey wines and caipirinhas, or just keep it simple with a main course, all of which serve two generously. The tambaqui ribs (yes, fish ribs, and a similar size to pork ribs) are served grilled (£29) or with a Brazil nut crust and roasted bananas (£25). Banzeiro is only let down by its decor - a scattering of handicrafts do little to liven up a bland airport-lounge-style space, where the strip lighting could be turned down a notch.
• Rua Libertador 102, Nossa Senhora das Graças, +55 92 3234 1621, restaurantebanzeiro.com.br

Buzzing mid-week with workers from the nearby Ceasa port - a jumping-off point for car ferries, and tourist boats heading out to the Meeting of the Waters - Peixaria da Bia is a no-frills lunch favourite in the city's industrial district. Head up the tiled steps to the first-floor space, where wall-to-wall metal shutters are rolled up during the day, revealing commanding views out over the vast river. It's all about local fish here, served fried, roasted, stewed (caldeirada) or as escabeche (with a tomato, onion and herb sauce). PFs (pratos feitos) are bargain worker's meals-for-one (£4) served with rice, beans and vinaigrette and farofa (toasted manioc flour). The friendly owner Bia, who holds court by the cash register, also serves roast tambaqui at the weekends (reservations recommended).
• BR 319, Avenida Ministro João Gonçalves, Ceasa, + 55 92 3618-1633, Facebook page

A couple of years in business, the immense Touch Down Game Bar does exactly what it says on the tin: a sports bar pushing the American football theme in a big way. Big, as in 30ft high, with a football helmet and goal posts adorning the white two-storey exterior; while inside, framed football memorabilia and waiters decked out as referees continue the theme. Two large screens and 21 flatscreens are perpetually tuned to sport, be it baseball, hockey and - of course - football during the World Cup. Novelty drinks include frozen fishbowl margaritas (£21, serves four) and chope sujabrahama (shandy with a salt rim, £2), while the menu is standard Americana, with the likes of hot dogs (£5-£7.30), burgers (£6.50-£8.30) and pork ribs (£11.80, serves two).
• Avenida Rio Branco 285, Vieiralves, + 55 92 3304 5363, Facebook.com page

Tramping the soulless corridors of a shopping centre might not be everyone's idea of a good night out, but it's often the easy option in big Brazilian cities, where air-con, thousands of car-parking spaces and a roster of top chefs under one roof all add to the convenience. Belle Époque, in Shopping Ponta Negra - a swish mall that opened last year - is a diminutive bistro with a double-height bar as its centrepiece. During the week, the set lunch includes French classics like steak and chips (£9-£11.80), with à la carte fish mains starting from around £10.50. A roster of interesting Amazonian fruits goes into the creative if pricey cocktail menu, devised by São Paulo's top mixologist Marcelo Serrano. Don't miss the Manauara cocktail (£5.50), with vodka, Frangelico, chocolate bitter and pulp from the sour, pungent Amazonian fruit cupuaçu with a jambu foam.
• First floor, Shopping Ponta Negra, Avenida Coronel Teixeira 5705, +55 92 3667 7386, Facebook page

There's something of a wild-west feel to this spacious tavern, with its weather-worn wooden veranda and a six-foot barrel positioned out front. Groups of twenty- and thirtysomethings gather at the street-side tables, while the upstairs seating has a more subdued vibe (and air-conditioning). The food, as in almost every bar across Brazil, is not designed for the solo drinker. Kick off with portions of classic fried bar snacks: the crispy salt-cod balls (bolinhos de bachalau, £6 for six) or the sun-dried beef and cream cheese pastries (pastéis de carne de sol com Catupiry, £5.70 for 10) are both excellent. Generous mains include the Escondidinho do Dedé - a sun-dried beef and cheese pie with a manioc mash topping (£10 serves two). A tipple or two of cachaça is a must: they have over 900 labels here, many of which line the walls, with comedy names and labels proudly on display. Take the edge off the spirit with a caipilé (£3.90) - a strawberry, kiwi or pineapple caipirinha with an ice lolly wedged in on top.
• Rua do Comércio 1003F, Parque Dez de Novembro, + 55 92 3236 0025, cachacariadodede.com.br