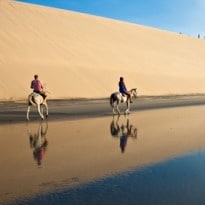 Our guide to World Cup city Forteleza - in Brazil's tropical north-east and surrounded by stunning beaches - includes where to stay, eat, party, and a great bar for watching the footie

Fortaleza is not often first choice for foreign visitors to Brazil's northeast, who prefer sultry Salvador, but it has long been a top holiday destination among Brazilians, mainly because it sits in the middle of an unbroken stretch of breathtaking beaches, including the famous Jericoacoara, that are regularly named among the world's best. Since being named a World Cup host city, Fortaleza has punched above its weight (it was first to complete its new stadium on time) but has also seen violent protests against Fifa's lavish spending during the Confederations Cup in June 2013.

The city - the first place in the country to abolish slavery, in 1884 - has several interesting museums and architectural gems, including the century-old Theatro José de Alencar, but its real charms are often best savoured outside, whether this involves selecting seafood to be freshly fried at a beach barraca, or shack, dancing forró until the early hours in one of the open-air clubs, or on the streets during the festas juninas, the month-long festivals commemorating three saints.

Mid-range: Hotel Luzeiros
Fortaleza has around 200 hotels so prices are extremely competitive. In fact, so many hotels are housed in near identical high-rise buildings that it can be hard to separate the shabby from the stylish at a glance. One of the smarter places to stay (if a little sterile) is the Portuguese-owned Hotel Luzeiros, a short walk from Meireles beach and just 6km from the airport. The modern decor and rooftop bar are a cut above many places in this price range, and all guests have panoramic views over the ocean, as well as a choice between two in-house restaurants, and a chic lobby bar. The buffet breakfast is included.
• +55 85 4006 8585, luzeirosfortaleza.com.br, doubles from £75 for a night B&B

Budget: Ceará Backpackers Hostel
At first glance, the centrally located hostel looks like a throwback to the days when travellers were content to carry around their own toilet roll, but don't let that put you off. The rooms, for individuals or groups, are basic but clean and painted with cheery murals while a central kitchen and living area encourages interaction with fellow travellers. Best of all, the hostel has a tranquil garden with hammocks for lounging around, which is rare in the frenetic centre of Fortaleza ...
• +55 85 4006 8585, from £12 a night, no website - you can book through hostelworld.com

Suvaco de Cobra
On the other hand, large open-plan restaurants that segue into lively nightclubs are easy to find in the city. For a more intimate setting, track down this small, homely boteca with painted brick walls and oilcloths on the handful of tables that is run by siblings Charlton and Scheyla Nogueira. Suvaco de Cobra, in the Montese district, has a loyal following among locals and students for a menu whose speciality is batata recheada - the humble jacket potato but filled with local specialities such as shrimps and carne de sol (salted beef left out to dry for two days in the sun) and cocktails combining sugarcane or cachaça, Brazil's sugarcane liquor, with exotic fruits like maracujá (passion fruit) or tamarind.
• Avenida Gomes de Matos 406, +55 85 3494 7556, Facebook page, dishes from around £7, open from 6.30pm daily except for Monday

Centro de Tapioquieras
Traditionally, tapioca dishes are eaten as a breakfast after the first swim of the day in a city that revolves around the beach. This collection of 26 tapioquieras (tapioca cooks) grouped in a lively hub, is situated a little out of the way, in the Messejana district on the CE-040 road to the coast, but it is well worth combining a visit here with a trip to the beach. A neutral-tasting starch made of fine manioc, or cassava, flour that is popular throughout the northeast, tapioca is packed with nutrients, cooked like a pancake and served in more than 60 ways at this venue, with either savoury or sweet fillings.
• Avenida Washington Soares 10215, +55 85 3274 7565, average cost is around R$9 (around £2.40), open daily from 5am

Mucuripe Club
If your enthusiasm starts to flag for the ubiquitous forró, the country dance music for which the northeast and particularly Fortaleza is famous, the Mucuripe club has five distinct dance areas where DJs play different genres, including electronic, axé (Afro-Brazilian pop) and classic rock. The vast club is one of the city's most popular dance venues and its location at the edge of town seems designed to let it squeeze in a few more, if needed. The club, which is only open at weekends and where things don't get going until at least 10pm, also has a large water fountain and a dining area.
• Travessa Maranguape, 108, +55 85 3254 3020, admission £8 to £15, mucuripe.com.br, open Friday and Saturday

O Seu Boteco
Watching a football match in a bar is a favourite pastime in Brazil and O Seu Boteco, which has only been open since the start of the year, has already gathered a loyal following. Like many drinking haunts in Fortaleza, you can watch football, dance samba or just drink beer and snack on delicious petiscos. The atmosphere is relaxed and the bar has a great selection of beer, ranging from the Uruguayan Norteña to Belgian Leffe.
• Avenida Dom Luis 575, +85 3461 1691, seuboteco.com.br, closed on Mondays

Dragão do Mar
To find out more about the history of the people of the northeast, head to the Dragão do Mar cultural centre in the city centre, which hosts films, exhibitions and live music and theatre performances, as well as a permanent exhibition about the people of the Sertão, the parched backlands. The centre, which is named in honour of Chico da Matilde, whose refusal to ship slaves south eventually led to the abolition of slavery in Fortaleza in 1884, also has a planetarium and extensive library. The distinctive white complex is made up of several buildings linked by raised walkways, which strengthen its connection with the nearby streets, where bars and cafes abound. Locals often start a long night out with a drink or two here.
• Rua Dragão do Mar 81, Praia da Iracema 81, +55 85 3488 8600, dragaodomar.org.br

Cocó Ecological Park
Covering 1,155 hectares (2.855 acres), the Cocó park is one of the biggest urban parks in Latin America. It was declared a public park in 1989 by state degree but has been a battleground for ecologists, architects, politicians and developers ever since. With nature trails, wooded areas, boat rides along the meandering Cocó river and activities such as tree walking on offer, the park is a popular draw for locals and visitors, but it is also an important place for protecting biodiversity since it hosts many rare species of endemic plant and animal life, as well as mangrove swamps.
• Avenida Engenheiro Santana and Rua Vicente Leite, Jardim das Oliveiras, +55 85 3452 1892, open to the public at weekends, entrance is free

Trips out of town

Icaraizinho de Amontada
Though largely still pristine, many of the beaches outside Fortaleza are now firmly on the tourist trail. Not so Icaraizinho de Amontada, which is around 50 miles north-west of the city, between the better-known Cumbuco and Jericoacoara, and still gets left off the regional map. People come here to kite or wind surf and not much else; little has changed for decades in this sleepy fishing village shaded by swaying coconut trees, apart from the wind turbines on the dunes around it.

Cachaça Museum
An unusual one this, but this museum-cum-alcohol theme park is worth the 30km drive from Fortaleza to Maranguape, where it is based. Learn about the history of the Ypióca variety of the northeast's top tipple as made by the Telles family since 1854. The estate has a museum with lots of sugarcane-related memorabilia; visitors can also step inside the huge oak barrels in which it is fermented, and tour the grounds - activities on offer include paintballing, archery, paddle boating, or just lie back in a hammock with a chilled caipirinha.
• Senador Virgilio Tavora, Maranguape, +55 85 3341 0407, ypioca.com.br

Up the coast from Fortaleza is one or Brazil's most celebrated beaches, Jericoacora. Photograph: J.L.Bulcao/Alamy