Bollywood actor Arjun Rampal shared a video of a Ganesha idol in Holland which appears to have been created using fresh oranges. 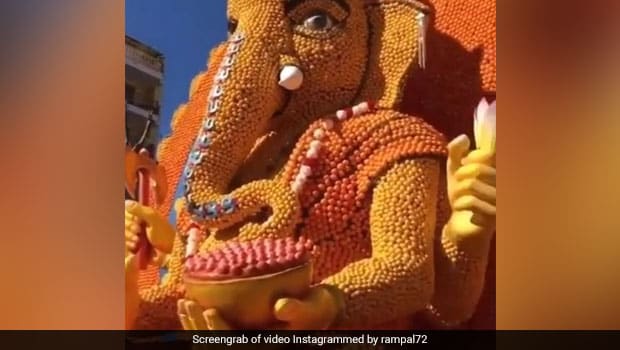 Festive season is on for Hindus around the world. There are two major festivals that people of the subcontinent are celebrating right now- Onam and Ganesh Chaturthi. Ganeshotsav or Ganesh Chaturthi began on September 2 and will continue till September 12. Hindus around the world are welcoming idols of Lord Ganesha into their homes for a period of 10 days. These idols are installed at homes and offices and will be immersed in water at the end of the festival, which is known as Anant Chaturdashi. Nowadays, people are looking towards more eco-friendly options for making Ganesha idols and a whole range of ingredients are being creatively used to fashion idols that are not just beautiful, but also sustainable.

To mark the festival of Ganesh Chaturthi, Bollywood actor Arjun Rampal shared a video of one such Ganesha idol in Holland, which has apparently been created using fresh oranges. The sizeable idol appears to have been partially made by putting a lot of oranges together. Sharing the video on Instagram, he wrote, "Holland is the orange capital of the world. Every year the locals celebrate the Ganesha festival there, with their best produce. #ganeshchathurthi #Ganpatibapamorya" (sic)

Take a look at Arjun Rampal's video of gorgeous Ganesha idol made from oranges in Holland:

Doesn't the idol look simply splendid? This divine avatar of the elephant-headed Lord is sure to be a treat for the eyes of many devotees. In 2017, a 27-feet tall idol of Lord Ganesha, also known as Maruti, had gone viral for its unique use of green bananas for creating the structure. The idol was created by Odisha's Natraj Club and the idea of using green plantains was that they would ripen over the course of the 10-day festival and could then be distributed among the poor and the underprivileged. Devotees also use a number of other edible materials to create Ganesha idol, including a variety of fruits and even chocolate. A baker in Ludhiana had recently made news for fashioning a beautiful Ganesha idol from Belgian chocolate.

This is our 4th consecutive year of the Chocolate Ganesha! It took a team of 20 chefs, 10 days and 100+ Kgs Belgian Chocolate to make this eco-friendly Ganesha. pic.twitter.com/EN85okaNx8

The idol will be immersed in pales of milk and the resulting chocolate milk will be distributed among poor children. Which of these three Ganesha idols is your favourite? Let us know in the comments section below!