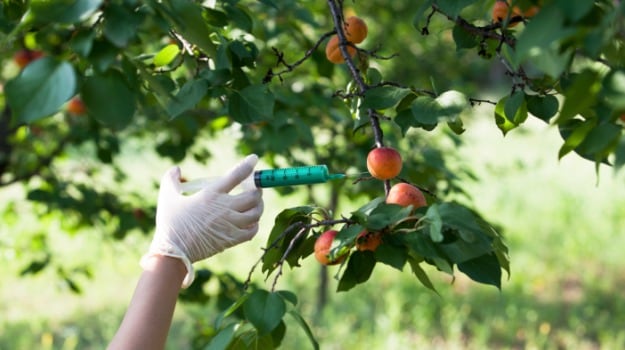 The issues surrounding GMOs - genetically modified organisms - have never been simple. They became more complicated last week when the International Agency for Research on Cancer declared that glyphosate, the active ingredient in the widely used herbicide Roundup, probably causes cancer in humans. Two insecticides, malathion and diazinon, were also classified as “probable” carcinogens by the agency, a respected arm of the World Health Organization.
Roundup, made by Monsanto for both home and commercial use, is crucial in the production of genetically engineered corn and soybean crops, so it was notable that the verdict on its dangers came nearly simultaneously with an announcement by the Food and Drug Administration that new breeds of genetically engineered potato and apple are safe to eat. Which they probably are, as are the genetically engineered papayas we’ve been eating for some time. In fact, to date there’s little credible evidence that any food grown with genetic engineering techniques is dangerous to human health - unless, like much corn and soybeans, it’s turned into junk food. But, really, let’s be fair.
Fair, too, is a guess that few people are surprised that an herbicide in widespread use is probably toxic at high doses or with prolonged exposure, circumstances that may be common among farmers and farmworkers. Nor is it surprising that it took so long - Roundup has been used since the 1970s - to discover its likely carcinogenic properties. There is a sad history of us acting as guinea pigs for the novel chemicals that industry develops. For this we have all too often paid with our damaged health.
Rarely is that damage instantaneous, but it’s safe to say that novel biotechnologies broadly deployed may well have unexpected consequences. Yet unlike Europeans, Canadians, Australians and others, we don’t subscribe to the precautionary principle, which maintains that it’s better to prevent damage than repair it.
We ask not whether a given chemical might cause cancer but whether we’re certain that it does. Since it’s unethical to test the effects of new chemicals and food additives on humans, we rely on the indirect expedient of extensive and expensive animal testing. But the job of the FDA should be to guarantee a reasonable expectation of protection from danger, not to wait until people become sick before taking products off the market. (You might have thought that government’s job was to make sure products were safe before they were marketed. You’d have been wrong - Rezulin, thalidomide or phthalates, anyone?)
Even now, when it’s clear that more research must be done to determine to what degree glyphosate may be carcinogenic, it’s not clear whose responsibility it is to conduct that research. The public health agencies of other countries? Independent researchers who just happen to be interested in the causes of non-Hodgkin’s lymphoma, the cancer with which glyphosate is associated, according to the IARC?
Or - here’s an idea - how about Monsanto, which has made billions of dollars selling glyphosate and the associated seed technology. (The company produces crop seeds that are resistant to glyphosate, which can thus be freely sprayed onto fields, in theory killing all plants but the crop. This scheme isn’t working as well as it once did for weed control, because many weeds have become glyphosate-tolerant. But that’s another story.)
Now that the safety of glyphosate is clearly in question, perhaps it’s time to mandate that the corporation - not the taxpaying public - bear the brunt of determining whether it should still be sold. Since the Environmental Protection Agency doesn’t have the resources to test, let Monsanto pay for the necessary, and independent, research.
While we’re at it, let’s finally start labeling products made with genetically engineered food. Right now, the only way we can be sure to avoid them is to buy organic food. If GMOs were largely beneficial to eaters, manufacturers would proudly boast of products containing them. The fact is that they have not. To date, GMOs and other forms of biotech have done nothing but enrich their manufacturers and promote a system of agriculture that’s neither sustainable nor for the most part beneficial.
We don’t need better, smarter chemicals along with crops that can tolerate them; we need fewer chemicals. And it’s been adequately demonstrated that crop rotation, the use of organic fertilizers, interplanting of varieties of crops, and other ecologically informed techniques commonly grouped together under the term “agroecology” can effectively reduce the use of chemicals.
Meanwhile, how about getting glyphosate off the market until Monsanto can prove that it’s safe to use? There’s no reason to put the general population, and particularly the farming population, at risk for the sake of industry profits.
© 2015 New York Times News Service
Photo Credit: Thinkstock
For the latest food news, health tips and recipes, like us on Facebook or follow us on Twitter and YouTube.
Tags:  Gmo