If there is such a thing as foods of the God, it is undoubtedly the biryani. Here are our 13 best biryani recipes that are ambrosial enough to make you crave some more with each bite. 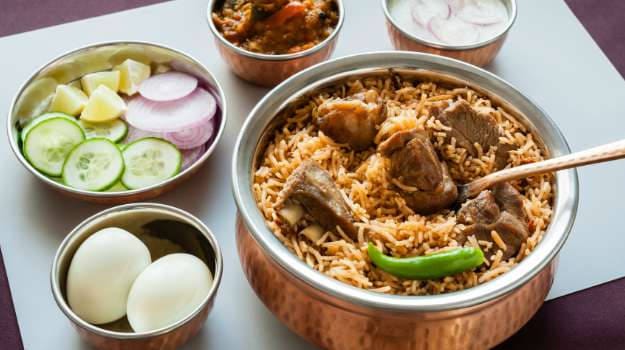 Biryani Recipes - Who doesn't love a plate of flavourful Biryani? Biryani, an evergreen classic, really needs no introduction. It's aromatic, it's heavenly and one of the most loved delicacies not just in India but across the globe. It is believed that Mughals were the first to introduce biryani in North India whereas South India was exposed to its brilliance through the Arabs. Biryani flourished in some of the notable Muslim centres throughout the country - including Lucknow, old Delhi and Hyderabad, to name a few - after which it was gradually embraced by all.

The style of cooking Biryani in North India differed from the Southern states. Since a large part of North India was inhabited by vegetarian communities like Brahmins and Marwaris, North Indians successfully experimented with it to arrive at the vegetarian versions. Vegetable Biryani, colloquially called 'Tehri' is a classic Sunday meal in most North Indian homes.

Rice is widely consumed in the Southern part of the country owing to which one can find a miscellany of mouthwatering versions. South India boasts of a wide variety of Biryanis over any other part of the country. Hyderabad itself is said to cook up to 40 distinct versions. The fiery chettinad cuisine of Tamil Nadu exhibits magnificent Biryanis. Some of the most celebrated Biryanis of South include - Hyderabadi Biryani, Coorgi Mutton Biryani, Bhatkali Biryani and Mangalorean Fish Biryani.

The Western part of the country bristles with a fantastic collection of Biryanis, one of the famous being the Bombay Biryani - a hearty combination of spices, meat and rice, studded with kewra. The Khojas and Boris Muslim communities kept alive the tradition of cooking Biryanis. When in Western India, one must try the Sindhi Biryani, Gujarati Biryani and Memoni Biryani. Aurangabad is also a centre where one can get a taste of Mughlai Biryani in Maharashtrian style.

In East, Biryani is mostly cooked in Bengal. They combine rice with meat, fish and prawns and cook it with heart-warming spices and ingredients. To talk of North-East India, one of the most notable Biryanis is the Assamese Kampuri Biryani.

Unlike Pulao, Biryani involves cooking rice and meat separately and finally cooking them together by forming layers of each in a vessel. One of the most famous ways of cooking Biryani is the dum method. It involves sealing the vessel thoroughly and keeping the lid closed to trap in the aroma. The Biryani is then cooked over slow fire/dum.

Traditionally, Biryanis can be classified under two categories - Pakki, wherein cooked meat is coupled with half-cooked rice and further cooked - and Katchi which involves raw mutton pieces, marinated in yogurt and spices, cooked together with uncooked rice.

Biryani is a complete meal in itself, apt to suit all occasions; whether a hearty meal on a lazy Sunday afternoon or a grand, scrumptious indulgence at the dinner table - there are varieties available to please one and all.

Just in case you are in a mood to cook some yourself this festive season, our handpicked 13 best Biryani recipes from across the country will be enough to inspire the cook within you.

Straight from the streets of Hyderabad, get the authentic flavours simmering in your kitchen. One of the most popular biryani recipes, this dish is surely here to win hearts. It's nothing but half-boiled rice layered with fried onions, mint, cooked meat and cooked dum style.

(Also Read: Mouthwatering Eid Special Dishes You Must Binge On)

Hyderabadi Biryani Recipe- This flavourful and delicious gastronomic wonder is a treat to relish and can often be cooked for dinner parties.

Keema Biryani is a popular Biryani recipe from South Indian cuisine that has a mouth-watering taste with spices, meat and dry fruits cooked together.

What's a biryani not cooked in a royal style. A classic from the royal Awadhi kitchen. Mutton pieces are cooked to perfection amid fragrant rice. Succulent, marinated mutton, slow-cooked in a melange of roasted spices to make a spicy Awadhi biryani.

Breathe in the aroma of this princely mutton biryani, this easy biryani recipe is cooked the royal Awadhi style. Perfect for your dinner table feasting!

Explore the burst of flavours enrobed in a mix of chicken and rice. A simple recipe, chicken reshmi biryani is everything you need to celebrate Eid.

A single pot dish, chicken biryani recipe has chicken and rice flavoured with a burst of chillies mingling with the aroma of varied spices, this easy biryani recipe is sure to melt your heart and palate!

Tender paneer pieces cooked to perfection in a hearty mix of rice and local spices. Doused in a creamy texture, this special treat will please one and all.

Paneer Biryani is the perfect biryani recipe for vegetarians and a paneer lover's delight.

From the beautiful city of Calicut, comes this authentic chicken Biryani. A quick and easy recipe using chicken and rice with distinct flavours of South. Yes, perfect biryani does exist.

Calicut Chicken Biryani is a popular recipe down south that has the perfect amalgamation of Chicken and rice with pleasing flavours of the region in a melange of spices, chillies and herbs. Mouth- watering indeed!

Surprise all by serving this authentic Iranian Biryani at your dinner table. Succulent fish pieces are cooked together in spices and a generous helping of nuts.

This one is a must try for all the chicken lovers. Raw chicken pieces are marinated and cooked with rice dum style - simply lip-smacking!

This one is a heartwarming combination of spices and condiments simmering with chicken pieces and rice. An added dose of coconut milk makes this one a creamy, aromatic treat.

Chicken biryani with coconut milk recipe is an aromatic dish that can spruce up your dinner party menu in an easy and quick way!

Beautiful fish pieces layered with rice and truckloads of flavours - this one will steal you all the praises! If you are bored with your usual chicken and mutton biryani, it is time you get hooked on to fish biryani and surprise your guests this festival.

Dum cooked birynai loaded with flavorful, tangy fried fish and aromatic spices along with rich cashew nuts. Can it get any better? A delicious Biryani recipe from the authentic and popular kitchen of Malabar.

Another fish biryani recipes, a classic Malabar biryani that can be devoured at all times, specially during the festive season of Durga Puja and Diwali.

A slow-cooked, delectable chicken biryani recipe full of aromatic flavours and layered with masalas, milk, chicken and vegetables cooked in a Handi which is a round pot like vessel, with the neck narrower than the base. A mouth-watering dish that will surely win hearts at the dinner table!

Handi Biryani is cooked on low flame with spices, milk, vegetables and chicken alternatively layered to bring out a bright and delicious biryani dish that is sure to fill your heart and platter!

Eggs are one of the most popular food in India and is often used in many Indian recipes such as Biryani. This egg biryani recipe is super easy and quick to make at home for dinner parties.

Egg biryani is a great dish to prepare for dinner party. Filled with spices along with scrambled and boiled eggs that makes for a sumptuous meal.

A perfect Biryani can never be bereft of the sensational aroma. A quintessential Biryani is always studded with a scented element which takes the aromatic quotient to yet another level. Jasmine, Rose, Kewra, Saffron and Screw-pine are widely used for this purpose.