The Truth About Baby Food 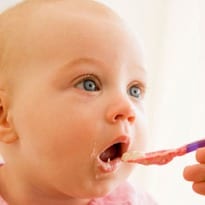 News that shop-bought baby foods are not as nutritious as home-made shouldn't surprise us. In fact, ignore the marketing: what babies under a year old really need is milk.

Having children is like opening the door to a whole other universe. Arguments you simply never knew existed, you suddenly become part of. News stories on any aspect of baby rearing are no longer just a convenient place to rest your cup of tea while you read other, more interesting bits of the paper.

This morning the "big news" in child-related stuff, sent to torture and confuse parents, was that bought baby foods are not as nutritious as those you make yourself. (That is, if you're not the sort of parent to whizz a Big Mac in a blender for her baby, as a mum on a birth board I read once did.) All the main UK babyfood manufacturers had their food analysed: Heinz, Boots, Hipp Organic, Ella's Kitchen and Organix. The study, by the department of human nutrition at the University of Glasgow, found that babies would have to eat twice the amount of shop-bought food to get the same amount of nutrients as home-made.

What's far more interesting is that, although of course it can vary from baby to baby, many of them under about a year old don't really need many solids at all. Milk, whether formula or breast milk, should be the their main source of nutrition exclusively for six months and thereafter complementary foods are slowly introduced, alongside milk, for tastes, textures and to provide the nutrients that a baby might start to lack at about six months.

"These nutrients," explains Gabrielle Palmer, nutritionist and author of the Politics of Breastfeeding and Complementary Feeding: Nutrition, Culture and Politics, "are zinc and iron. When they start to run out depends on the baby's birth stores." These birth stores depend on, among other things, whether the cord was cut too early, before placental transfusion stopped naturally. If this happens before it stops pulsating the optimum amount of nutrients won't have transferred from mother to baby. This is partly why some babies might do OK on just milk for longer.

I'll leave you to look up which foods are rich in zinc and iron and might be suitable for first foods, but they won't include baby rice and mushed-up veg - the two foods most commonly given to weaning babies.

In fact, the ability to eat solids is not an event, but a process, and differs from baby to baby. When a baby can sit up unaided, can reach out and grab food (the "pincer movement") bring it to its mouth and has started to largely lose its tongue thrust reflex (to stop it gagging) then it's ready to start solids. But this process starts with a baby licking and sucking food, and then eventually, as the tongue thrust reflex gets further and further back, beginning to swallow the food. It doesn't happen overnight.

Although the Department of Health guidelines for starting solids changed from four to six months in May 2003, baby food manufacturers still put "suitable from four months" on their jars. Why?

"Because," explains Gill Rapley, a former health visitor for 25 years and author of Baby Led Weaning, "in this country we haven't adopted the International Code of Marketing of Breast Milk Substitutes [PDF] as law. It's just a guideline."

Until such time as it becomes illegal (and it is in some countries), babyfood manufaturers will continue to confuse parents by saying their purees are suitable from four months because why would they waste two months of valuable commerce?

"The thing is," says Palmer, "most of the baby food given at four months goes down the babygrow. It's wasted, but it makes money for the companies. Babies won't die of malnutrition if they are not given purees at four months, but they will if not given milk at that age."

'The ability to eat solids is not an event, but a process, and differs from baby to baby.' Photograph: Alamy