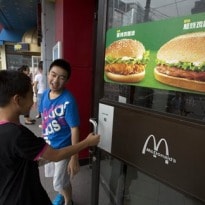 McDonald's said that key global sales figure fell 3.7 percent in August due to the food-safety scandal in China.

Earlier this month, McDonald's Corp. said that it will monitor its suppliers in China more closely after a food-safety scandal in the country hurt its sales and reputation. The announcement came after a TV report in July showed workers at McDonald's supplier Shanghai Husi Food Co. -- a division of OSI Group Inc. -- repacking expired meat. McDonald's stopped using the plant in Shanghai.

The company plans to increase audits and video monitoring at its suppliers and send more employees to meat production facilities to ensure its food is prepared safely. It has also named a new food safety officer and created a hotline where employees can report poor food safety practices.

McDonald's is not the only fast-food company to be hurt by food-safety concerns in China. Yum Brands Inc., whose brands include KFC and Pizza Hut, has also stopped using meat from the Shanghai plant and said that its restaurants cut all ties with OSI in China, the U.S. and Australia.

In the U.S., sales at established locations in operation at least 13 months declined 2.8 percent in August. The figure dipped 0.7 percent in Europe due to weakness in Russia. McDonald's said that soft revenue is expected to pressure its U.S. margin performance in the third quarter.

Promoted
Listen to the latest songs, only on JioSaavn.com
Aside from dealing with the China food-safety scandal, McDonald's faces increasing competition and shifting eating habits. Part of the problem is that chains like Chipotle are gaining favor by touting more wholesome ingredients and the ability to customize food. McDonald's is trying to adapt on multiple fronts, including a "Build-Your-Own-Burger" test in Southern California and a new Bacon Clubhouse burger positioned as a premium offering at $5 or $6. (More: Build-your-own burger at McDonald's soon?)

McDonald's shares fell 41 cents to $92.09 in morning trading. Its shares have fallen 9 percent over the past three months.