Beating the Risk of Diabetes 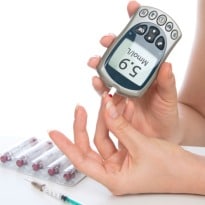 This year, nearly 2 million American adults and more than 5,000 children and adolescents will learn they have a potentially devastating, life-shortening, yet largely preventable disease: Type 2 diabetes. They will join 29.1 million Americans who have diabetes.

Diabetes and its complications are responsible for nearly 200,000 deaths a year; the fatality rate among affected adults is 50 percent higher than among similar people without diabetes. Alarmingly, recent studies even have linked diabetes to an increased risk of dementia and Alzheimer's disease. Even people with above-average blood glucose levels, but not diabetes, have an elevated risk. Type 2 diabetes runs in families, largely because its primary risk factor - excess weight - runs in families. But you can keep it at bay by losing weight and becoming more active.

Unfortunately, as numerous studies have shown, intensive efforts to get people to lose weight, eat healthier and become moderately active fail more often than not even among those who have diabetes. It is easier (and more effective) to avoid becoming overweight in the first place.
But it is by no means impossible to lose weight, and at some point, your physical and mental well-being may depend on it. Here are some diet and exercise tips that can help. Avoid drastic measures. Crash diets and kooky eating plans are doomed to fail. It's better to make gradual changes in what and how much you eat to give your body a chance to adjust.

The Diabetes Prevention Program study, conducted among about 3,800 people who had pre-diabetes, found that moderate weight loss - an average of 12 pounds - reduced the odds of progression to diabetes by nearly 50 percent. Although total calories must be reduced, you don't have to count them. Rather, concentrate on your food choices and gradually reduce portion sizes. Some people find it helpful to write down everything they eat and drink each day for a week or two.An excellent discussion of what is known about the effect on diabetes of various foods and supplements appeared recently in Nutrition Action Healthletter at cspinet.org/iceberg.pdf.

Carbohydrates - breads, grains, cereals, sugary drinks and sweets of all kinds - are most problematic for people with diabetes or at risk of developing it. Carbohydrates are eventually metabolized to glucose, which raises the body's demand for insulin. Consume less of them in general, and choose whole-grain versions whenever possible.

If you must have sweet drinks, select artificially sweetened ones. In two huge studies of nurses and other health professionals who were followed for 22 years, those who drank one or more sugary soft drinks a day had about a 30 percent higher risk of developing diabetes than those who rarely drank them, even after their weight was taken into account.

Fruit juice is not necessarily safer than soda. All drinks with fructose (table sugar, high-fructose corn syrup, honey or agave) may increase body weight, insulin resistance and belly fat, all of which can promote diabetes. But there's good news about coffee. Two or three cups of coffee (but not tea) a day, with or without caffeine, have been consistently linked to a lower risk of Type 2 diabetes. Consider having coffee (unsweetened or artificially sweetened) in place of soft drinks. Keep in mind that specialty coffee drinks can be loaded with sugar and calories.

For protein, limit consumption of red meat, especially processed meats like sausages, hot dogs and luncheon meats, which are linked to a higher diabetes risk. Instead, choose fish, lean poultry (skinless and not fried), beans and nuts. Low-fat dairy products, including yogurt, and even fatty ones may lower the risk of diabetes; the reason is unclear.

Most protective are green, leafy vegetables - spinach, chard, kale, collards, mustard greens and even lettuce - as well as cruciferous vegetables like cabbage, broccoli and cauliflower. But all vegetables are good and should fill at least two-thirds of your dinner plate. Consider dining several times a week on a big salad, adding beans, fish or chicken for protein. Use dressing sparingly.

The nutrients magnesium and vitamin D are also potentially protective. In fact, the preventive value of leafy greens, whole grains, beans and nuts may lie in their high magnesium content. In a well-designed clinical trial of 32 overweight people with insulin resistance, the prelude to diabetes, blood glucose levels and insulin sensitivity improved in those who took a daily magnesium supplement for six months.

Don't go overboard: More than 350 milligrams of magnesium daily can cause diarrhea.
Vitamin D, long known to be crucial to healthy bones, may also be helpful. In one study of 92 overweight or obese adults with prediabetes, those who took a supplement of 2,000 international units of vitamin D daily had better function of the pancreatic cells that produce insulin.

Listen to the latest songs, only on JioSaavn.com
In studies of people who had diabetes, however, vitamin D supplements did not seem to help, perhaps because their benefit was overwhelmed by the medications taken by participants.
Of course, how much you weigh and what you eat are not the only concerns. Regular, preferably daily, physical exercise is a vital component of any prevention and treatment program for Type 2 diabetes, or most any chronic ailment. Weight loss can reduce diabetes risk by about 50 percent, but adding exercise to that can lower the odds by 70 percent, compared with people who remain overweight and inactive, according to a study that followed nearly 85,000 female nurses for 16 years. Women who were active for seven or more hours weekly had half the risk of developing diabetes as did women who exercised only a half-hour a week.

It helps to live in a community where walking, the nation's most popular form of exercise, is feasible and safe. A Canadian study of recent immigrants found a significantly higher incidence of diabetes among those living in areas where it was a challenge to walk.
When communities are retrofitted, or new living and working environments are developed, creating areas conducive to exercise should always be part of the plan.