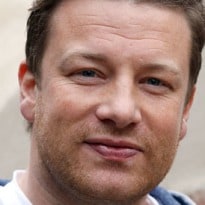 Some poorer Britons choose to eat "chips and cheese out of Stryrofoam containers" while sitting in a room with a "massive fucking TV", Jamie Oliver has said, adding that he cannot understand "modern-day poverty in Britain".

The celebrity chef made the remarks while promoting his next television project, which he hopes will encourage healthy eating by people on modest incomes. In an interview with the Radio Times, Oliver expressed bewilderment that poorer Britons would choose cheap fast food while spending their money elsewhere.

"I'm not judgmental, but I've spent a lot of time in poor communities, and I find it quite hard to talk about modern-day poverty. You might remember that scene in [a previous series] Ministry of Food, with the mum and the kid eating chips and cheese out of Styrofoam containers, and behind them is a massive fucking TV. It just didn't weigh up.

"The fascinating thing for me is that seven times out of 10, the poorest families in this country choose the most expensive way to hydrate and feed their families. The ready meals, the convenience foods."

Oliver, who has campaigned for improved diets since his Channel 4 show Jamie's School Dinners in 2005, urged people to switch from shopping at supermarkets to buying smaller quantities of groceries from their local market. He said that Britain had much to learn from Italy and Spain about buying fresh produce and eating well on a limited budget.

Oliver said more people would take more notice of their food bills if they were told that after a mortgage, the amount they spent at supermarkets would be the largest financial outlay of their lives. But he complained that most people were more loyal to a particular supermarket "than any religion or brand".

"One of the other things we look at in the series is going to your local market, which is cheaper anyway, but also they don't dictate size," Oliver said. "From a supermarket you're going to buy a 200g bag of this or a 400g pack of that. If you're going past a market, you can just grab 10 mange tout for dinner that night, and you don't waste anything."

He also urged people to look overseas to learn how to eat well on a limited budget. "Some of the most inspirational food in the world comes from areas where people are financially challenged. The flavour comes from a cheap cut of meat, or something that's slow-cooked, or an amazing texture's been made out of leftover stale bread," said Oliver, who was promoting his new Channel 4 series, Jamie's Money Saving Meals.

"I meet people who say, 'You don't understand what it's like.' I just want to hug them and teleport them to the Sicilian street cleaner who has 25 mussels, 10 cherry tomatoes, and a packet of spaghetti for 60 pence, and knocks out the most amazing pasta. You go to Italy or Spain and they eat well on not much money. We've missed out on that in Britain, somehow."

Imran Hussain, head of policy at the Child Poverty Action Group, said: "Jamie Oliver is right to say that healthy food doesn't always have to be expensive ... but for many families it's low income which gets in the way of healthy eating."

Hussain added: "As official statistics show, parents of poor children are much less likely to be able to afford fresh fruit for their children. We also know from the evidence that as the incomes of poor families rise, they spend more on things like healthy food and children's clothes.

Jamie Oliver said: 'Seven times out of 10, the poorest families in this country choose the most expensive way to hydrate and feed their families. The ready meals, the convenience foods.' Photograph: Jonathan Brady/PA