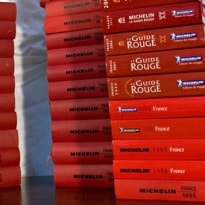 Few events are more keenly awaited in France than the release of the annual Michelin restaurant guide, when French chefs and their customers find out who has found favour with the oracle of gastronomy. This year is no exception. But one week before the red guide is due to announce its coveted three-star awards for 2014, a leading French food critic has leaked its decisions and attacked its directors for the "bizarre" choices that favour young chefs.

In a short but pithy column in the weekly magazine Le Point on Monday, Gilles Pudlowski bemoaned the days of the Michelin directors "whose competence was uncontested". Ever since the brief tenure of Briton Derek Brown, who was appointed in 2001, the guide had "lost the plot", Pudlowski wrote.

The Michelin restaurant guides are now run by an American international director, Michael Ellis, and his German deputy, Juliane Casper. Ellis has said he wants to recognise young chefs. "There's nothing wrong with that," said Pudlowski. "But is that any reason to forget to crown the unchallengeable chefs?"

Pudlowski told the Guardian that his phone had not stopped ringing since he divulged in his column that the newest three-star restaurant outside Paris to enter the 2014 guide would be l'Assiette Champenoise, in Reims. Its chef, Arnaud Lallement, 39, offers dishes such as black pork with bacon, foie gras and potatoes. Pudlowski said Lallement's rival of the same age in the city, Philippe Mille at Les Creyères, would have been a worthier choice.

In Paris, according to Pudlowski, Alain Ducasse at Le Meurice is to retain the three stars he was awarded at the Plaza-Athénée, which is currently closed.

Pudlowski, who publishes his own restaurant reviews in the Guides Pudlo, also criticised the Michelin guide's failure to sanction chefs by removing stars.

"Can't they find any French people to run this guide?" Pudlowski fumed. He pointed out that the top management decided on the stars, not the French restaurant inspectors.

Ellis, who previously held a senior post in the Michelin tyre division, took over the restaurant guides covering more than 20 countries in 2012. The French guide is usually issued in March, but this year the release has been brought forward by a week. Ellis could not be reached for comment on Monday.