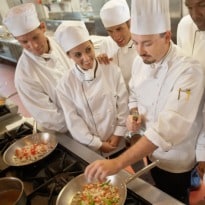 As the fragrance of masala-fried prawns wafts through the room, a discerning audience diligently takes quick notes of the instructions given by the chef to ensure the coating is crisp and not burnt. What would probably be mistaken as a cooking class in session is in reality a clique of foodies at a culinary club learning directly from experts.

"Teaching indulgent recipes on a live cookery platform is always attractive because you can interact directly with the chef. People can ask questions, clear doubts and be a part of a group that is experimenting with food," Vijay Wanchoo, senior executive vice president and general manager of The Imperial, Delhi, told IANS.

"The purpose of the club is to understand and appreciate food better and to create awareness," he said, adding that The Imperial Culinary Club (ICC) was started in 2009 and is now 32 sessions old.

Culinary clubs are a niche market, said Deepak Bhatia, executive chef at Gurgaon's The Westin, adding when the Westin Culinary Academy was started this year, it was purely to elevate the status of their speciality chefs from merely serving food to sharing their knowledge and demonstrating authentic cooking styles.

"The popularity is growing. The response we got was very good," said Bhatia.

Such clubs are slowly gaining ground in the capital because the rules at the dinner table have been redefined with globetrotting fervour catching on among Indians and international cuisines like Italian, Chinese, Japanese, Thai and Lebanese are finding many takers among cookery enthusiasts.

Fortythree-year-old Minu Garg is an active member of a culinary club in the capital and her mission is to showcase her expertise on special occasions.

"We travel a lot and know how an Italian pasta would taste. Usually, many Italian joints in the city offer an Indian version of a pasta or a pizza. Learning from these experts bears a mark of authenticity and helps me create something close to the original," Garg said.

The clubs heavily depend on the word-of-mouth campaigns and social media platforms to popularise their fortnightly or monthly classes. Open to all, an individual has to shell out anything from Rs.1,500 to Rs.2,000 for a cooking demonstration, a recipe folder and lunch.

While such innovations are here to stay, the age-old charm of flipping through grandmother's recipe notebook or a cookbook will never fade away. This is why ICC occasionally launches a cookbook to push its envelope a bit further. In these exclusive sessions, the author will don the hat of a chef: he will cook, share experiences and answer queries.

Promoted
Listen to the latest songs, only on JioSaavn.com
The ICC recently launched "A Sense For Spice" by Tara Deshpande Tennebaum as its publishers firmly believe cookbooks are like a treasured personal diary.

"The traditional format of a physical book still appeals to a large extent, even more in the case of books on food and drink since it is easier to go through so many recipes," Krishna Kumar Nair, head of marketing and merchandise at publishing house Westland, told IANS.

Comments"In this day and age of nuclear families, I guess it is also a blessing in disguise to all those who want to make something new and quickly enough," he added.