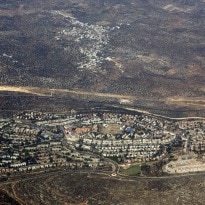 The McDonald's restaurant chain refused to open a branch in a West Bank Jewish settlement, the company said Thursday, adding a prominent name to an international movement to boycott Israel's settlements.

Irina Shalmor, spokeswoman for McDonald's Israel, said the owners of a planned mall in the Ariel settlement asked McDonald's to open a branch there about six months ago. Shalmor said the chain refused because the owner of McDonald's Israel has a policy of staying out of the occupied territories. The decision was not coordinated with McDonald's headquarters in the U.S., she said. In an email, the headquarters said "our partner in Israel has determined that this particular location is not part of his growth plan."

The Israeli branch's owner and franchisee, Omri Padan, is a founder of the dovish group Peace Now, which opposes all settlements and views them as obstacles to peace. The group said Padan is no longer a member.

The decision by such a well-known multinational company to boycott the West Bank deals settlers an unwelcome blow.

It also adds the name of an important international brand to a movement that has urged businesses to stay out of the West Bank. International companies like Caterpillar, France's Veolia and others have faced pressure from a global network of pro-Palestinian activists to sever links with the settlements.

The activists have also pushed consumers to shun products made in settlements. Israeli academics and unions have also been boycotted because of Israel's settlement policies and European countries are considering stepping up efforts to label settlement-made products sold in Europe.The Palestinians want the West Bank, along with the Gaza Strip and east Jerusalem, as part of their future state. Israel captured those areas, along with the Golan Heights, in the 1967 Mideast war. The Palestinians and most of the international community consider Israel's West Bank settlements illegal or illegitimate.

The mall's owners, settlers and politicians who back them chided McDonald's for its decision.

"McDonald's has gone from being a for-profit company to an organization with an anti-Israeli political agenda," said Yigal Dilmoni, a leader of the Yesha Council, a settler umbrella group. He urged Israelis to think twice before they buy a meal at McDonald's following its decision. Pro-settler lawmaker Ayelet Shaked said she would boycott the fast food chain.

Tzahi Nehimias, a co-owner of the Ariel mall, said an Israeli burger chain, Burger Ranch, had offered to take McDonald's spot. He also said Burger King had shown interest, but Miguel Piedra, a spokesman for Burger King Worldwide Inc. said the company had no plans to re-enter Israel. The company closed its restaurants in Israel in 2010 and turned them over to Burger Ranch.

Nehimias said other international companies who were asked to open a branch at the mall also declined, but none cited the mall's location in a settlement as a reason. He declined to identify the other companies. Some 19,000 Jewish settlers live in Ariel and it has a large student population.

"We totally understand and support people who think settlements are bad for Israel's interests," said Yariv Oppenheimer, who heads Peace Now. "They don't want to take an active role by opening a business there and helping to expand and to contribute to the settlement idea."

Rafeef Ziadah of the Palestinian Boycott, Divestment and Sanctions movement said McDonald's move "will encourage other corporations to end their complicity in Israel's occupation."

Listen to the latest songs, only on JioSaavn.com
This is not the first time McDonald's has stirred controversy in Israel. The company didn't open a branch in Israel until 1993 due to the Arab League boycott of the country.

A year later, McDonalds built a branch near a memorial to Israel's Golani military brigade, and Israelis objected to the large double arches sign there, saying it desecrated the site. The sign was later made smaller. In 2004, McDonalds was criticized for telling its Arabic and Russian speaking staff not to speak those languages at work.

CommentsPhoto-AP: In this Sept. 20, 2010 aerial file photo, taken through the window of an airplane, the West Bank Jewish settlement of Ariel is seen. The Israeli branch of McDonald's says it won't open a restaurant in a Jewish settlement to protest Israel settlement policy.