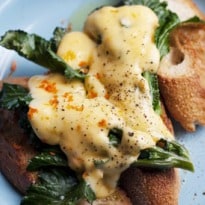 Purple sprouting is tough enough to thrive whatever the weather. But it's the delicate flavour that will win you over.

Sprouting broccoli, the thin-stemmed variety with the deep purple heads, will withstand the winter cold, a hoar frost or even deep snow. Growing it in the vegetable patch a couple of years ago, I was grateful for its robustness and ability to endure a British winter. Just as impressive was its habit of sending up new shoots long after I had harvested the flowering heads, like a cut-and-come-again cake. The white variety is good, too, though somewhat less hardy.

When there was snow on the ground a few weeks ago, purple-sprouting broccoli was one of the few vegetables to get through to our local greengrocer's. It was a surprise and delight to find something locally grown and in fine fettle. That night it came steamed and tossed in a little butter to which we had added lemon juice and a sprinkling of capers. The next day as a main dish under a blanket of cheese sauce with a thin crust of grated parmesan, a little paprika and fine breadcrumbs. Good, but nutmeg would have been a calmer addition than the red pepper.

The long slender stems of the sprouting broccoli family are more interesting to eat than the chubby stalks of the supermarkets' green calabrese. The thicker green stalks are not particularly good eating.

When I find really good purple sprouting, tightly budded with crisp, freshly picked stalks, I cut it into short lengths and small sprigs and cook it in a shallow pan in which I have already fried a little garlic and torn pancetta in olive oil. It takes just 3 or 4 minutes to come to tenderness. Add a scattering of parmesan, grated finely, over the top. On a cold spring day it is something to eat with thickly cut bread and sweet, pale butter.

I have made soup with the slightly older shoots. Sometimes I use bacon as the base note, other times a little onion. You can thicken it very successfully with potatoes, scrubbed and chopped and added once the bacon and onion have coloured a little. Once the greens and some chicken or vegetable stock have been added, no more than 10 minutes' simmering is needed. Finish the soup with milk, cream or crème fraîche. This is not a soup that should be too long on the stove, or its brightness and energy will fade. Seasonings can include mustard and lemon.

What I have only recently discovered is how fine the purple sprouting is when cooked for a long time. This is best done (I suggest only done) in the oven. Cut the longest stems you can find, leaving the heads intact, place in a baking dish with a little sliced garlic and enough vegetable or chicken stock to almost cover the stems, and cover with foil. Bake for about 30 minutes, until the point of a kitchen knife can be inserted without pressure. The colour will darken, but the flavour will mellow and sweeten.

Anchovy will perk up a head of purple sprouting. Chop it finely, then fry for 5 minutes with olive oil, finely chopped shallot and parsley. Add trimmed stems and heads of purple sprouting and cover briefly with a lid to let the vegetable steam. After 5 minutes or so, toss the greens with the anchovy mixture (the fish will almost have disappeared). Pile on to toasted sourdough.

Without the toast and the orange zest, this makes a fine side dish for a Sunday roast. I have eaten it as main course with a mound of brown rice, and it also works as a salad. You can also use this method for tenderstem broccoli. Serves 4.

Allow the butter to soften, but not melt. Put a pan of water on to boil, then balance a heatproof glass or china bowl on top. It should not touch the water. Put the egg yolks into the bowl, add a teaspoon of water, then whisk the yolks lightly, trickling in the softened butter a little at a time until you have thick creamy sauce.

It is crucial not to allow the sauce to get too hot (it will split), so turn off the heat once the sauce starts to thicken. Stir in a teaspoon of grated orange zest, the lemon juice, a little salt, pepper and the crème fraîche. You can keep the sauce warm by leaving it over the hot water and giving it a regular stir with the whisk. Steam the broccoli for 4 or 5 minutes, until tender to the point of a knife. Toast the bread on both sides until lightly crisp, then trickle with just enough olive oil to moisten. Divide the broccoli among the toasts and dress with the sauce.

I use speck for this because its flavour holds up well against the broccoli, but you could use any air-dried meat. This is also a good way of using up the Sunday roast. Cut the slices as thinly as possible. Serves 2.

Chop the dill finely, and add to the crème fraîche, together with a little salt and pepper. Gently toss the hot potatoes in the dressing.

Trim the broccoli, keeping the most tender leaves attached, then steam or boil in lightly salted boiling water for a few minutes, until done to your liking. Drain and toss with the potatoes, carefully, trying not to break the spears up.

Serve the salad on plates or shallow bowls, tucking thinly cut speck among the potatoes and broccoli.