This Restaurant Serves Food That's About to Expire! 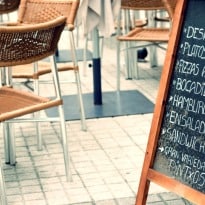 A restaurant serving dishes made from food about be thrown away by supermarkets and other companies opened its doors in Copenhagen on Tuesday.

"We had all worked in kitchens or supermarkets and seen how much food was thrown away, and we wanted to do something about it," said Sophie Sales, a co-founder of "Rub og Stub", which translates as "lock, stock, and barrel".

Denmark is already home to an active community of "freegans", people who eat discarded edible food to reduce waste.

But unlike activists, Rub og Stub won't go rummaging through trash to find its ingredients, and the restaurant doesn't accept food that's been found through so-called "dumpster diving".

Instead, they're trying to get to the food before grocery stores and other retailers throw it out.

"We had hoped to secure some permanent deals before the opening, but it was hard because this is such a new concept," said Sales.

The central Copenhagen restaurant, which is run by volunteers and will give all profits to three charities in Sierra Leone, had to buy some ingredients for the launch.

"Potential suppliers (donors) found it hard to believe that it's realistic and that we would really open," she said.

"It's been everything from lamb chops and duck breast, to big bags of grapes and dairy products," Sales said.

Most products are given away because they're nearing their expiry date.

For supermarkets, the food "wouldn't be worth putting on the shelves since they could only keep it there for two or three days".

"If we get it on the last day before it expires, we can either put it in the freezer or use it on the same day," she said.

Promoted
Listen to the latest songs, only on JioSaavn.com
Rub og Stub doesn't accept food that's already been prepared elsewhere, and because of its sourcing methods, the menu changes every day.

On Tuesday, it was serving meat patties known as "frikadeller", with red cabbage.