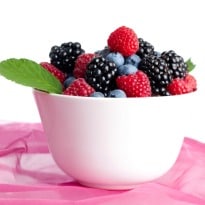 Men who ate the fruits along with other foods rich in flavonoids were found to be 40 percent less likely to develop the brain disease, Daily Mail reported Thursday.

And those who ate berries at least once a week could cut their risk of developing the disease by a quarter compared with those who never ate them, the study by British and US experts has found.

Flavonoids - also found in tea and red wine - are antioxidants which can offer protection against diseases like heart disease, some cancers and dementia.

The research is the first large-scale study looking at the effect of flavonoids in protecting against Parkinson's disease.

Promoted
Listen to the latest songs, only on JioSaavn.com
It causes tremors and muscular rigidity or stiffness, and affects all kinds of movement in the body.

Xiang Gao of Harvard School of Public Health, one of the study leaders, said: "Given the other potential health effects of berry fruits, such as lowering risk of hypertension as reported in our previous studies, it is good to regularly add these fruits to your diet."