Drink Up! Coffee May Lower Risk of Diabetes 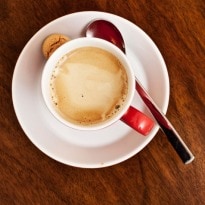 Calling all coffee lovers! Here's a piece of good news. A new research suggests that drinking four cups of coffee a day may decrease an individual's risk of developing Type 2 diabetes.

The Institute for Scientific Information on Coffee (ISIC) in Switzerland has published its annual diabetes report outlining the latest research on coffee and type 2 diabetes. Researchers explain, "The evidence shows that drinking three to four cups of coffee per day is associated with an approximate 25 percent lower risk of developing Type 2 diabetes compared to consuming none to less than two cups per day."

Type 2 diabetes is a condition in which the cells in the body fail to respond to the insulin produced. About 90% of all cases of diabetes worldwide are of this type.

The study also states that drinking decaffeinated filtered coffee at lunch time is most effective in lowering your chances of developing diabetes. Further, with each additional cup of coffee relative risk of developing Type-2 diabetes reduces by 7 to 8 percent. Thus, indicating that caffeine is unlikely to be responsible for this effect.

Their findings showed that filtered coffee exhibited a greater protective effect than boiled coffee. Similarly, decaffeinated coffee showed a greater protective effect than caffeinated coffee. These positive effects indicate that coffee consumption may improve glucose and  energy metabolism and also help in burning more calories. Previous studies suspected similar benefits, but experts conclude that more research and evidence is required to identify 'how and why' the body has better glucose tolerance with higher coffee consumption. With inputs from IANS