How Honey Acts as an Anti-Bacterial 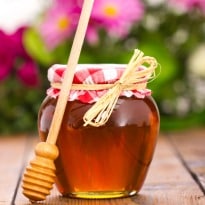 Our grandmothers have extolled the medicinal virtues of honey, for everything from cold and sore throats to colitis and even diabetes. Now add battling bacterial resistance to the list. That's what a study conducted as part of the 247th National Meeting of the American Chemical Society (ACS), the world's largest scientific society, has found.

"The unique property of honey lies in its ability to fight infection on multiple levels, making it more difficult for bacteria to develop resistance," the study's leader Susan M. Meschwitz of the Salve Regina University in Newport, Rhode Island, was quoted as saying in a statement.

According to her, honey uses a combination of weapons, including hydrogen peroxide, acidity, osmotic effect, high sugar concentration and polyphenols -- all of which actively kill bacterial cells. For instance, the osmotic effect, which is the result of the high sugar concentration in honey, draws water from the bacterial cells, dehydrating and killing them.

Several earlier studies have shown that honey inhibits the formation of biofilms or disease-causing bacteria. According to Meschwitz, "Honey may also disrupt quorum sensing, which weakens bacterial virulence, rendering the bacteria more susceptible to conventional antibiotics". Quorum sensing is the way bacteria communicate with one another and may be involved in the formation of biofilms.

Honey is effective because it is filled with healthful polyphenols, or antioxidants, she said. These include the phenolic acids, caffeic acid, p-coumaric acid and ellagic acid as well as many flavonoids. "Several studies have demonstrated a correlation between the non-peroxide antimicrobial and antioxidant activities of honey and the presence of honey phenolics," Meschwitz added.

A large number of laboratory and limited clinical studies have confirmed the broad-spectrum antibacterial, antifungal and antiviral properties of honey, she said. Her team too found that honey has antioxidant properties and is an effective antibacterial.

Why raw honey is good for you

Now, an alcoholic drink made of fermented honey

Promoted
Listen to the latest songs, only on JioSaavn.com
Honey-Lemon Tea