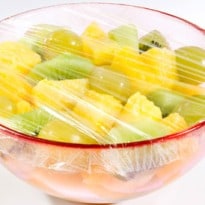 The phthalate chemicals used in packaging are banned in some countries and have been blamed for many ailments. So should you ban them from the house?

If you've had to fight though plastic packaging to get to your food you won't be surprised to hear it can raise your blood pressure - but it's the phthalate chemicals used in the packaging rather than the effort involved, that's to blame. These chemicals are generally used to make plastic soft, for example in credit cards or plastic shower curtains. A study of nearly 3,000 children in the Journal of Pediatrics found that children between the ages of six and 19 who had been exposed to phthalates (measured by levels of breakdown products of the chemicals in their urine) had higher levels of blood pressure than those who didn't.

When I asked the lead researcher, Leonardo Trasande from New York University School of Medicine, if the small, clinically insignificant rise in blood pressure was likely to mean anything, he said it could do so in later life. "We know that phthalates damage the walls of arteries by oxidative stress and they may directly damage heart cells," he says. "We know these chemicals get into food from plastic wrappings and gloves, and that they are in PVC flooring and cosmetics. We think they may have a effect on cardiovascular health and that children and adolescents should have limited exposure."

The debate about phthalates, specifically those with low molecular weight such as DEHP, DBP and BBP, has gone on for years. They are known as endocrine disruptors as they are also accused of messing with hormones and causing girls to reach puberty earlier, as well as reducing sperm count in boys. Denmark has banned some of them and may extend this further, while other countries have banned them from toys. A report from the WHO said more research was urgently needed on their effect on rising rates of a range of diseases such as diabetes and ADHD. The report stressed the WHO's concern over the exposure in young children of phthalates and other environmental chemicals that seem to interfere with human hormones. Phthalates have also been linked to allergies and asthma.

Phthalates leach into food through packaging so you should avoid microwaving food or drinks in plastic and not use plastic cling wrap and store your food in glass containers where possible. If you can avoid pre-packaged, processed food then you are not only a terrific human being but you will reduce your exposure. It may be too much to ask you to replace that vinyl flooring with natural wood but studies do show that children breathe in phthalates and absorb them through skin.

Picture: Clingfilm ... a health issue or not? Photograph: Photocuisine / Alamy/Alamy