Is Organic too Expensive? 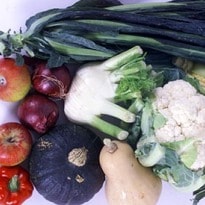 We're all feeling the pinch so can we be persuaded to fork out for organic food?

Organic can be a hard sell, especially if you shop principally with your eyes and wallet. Is handing over your hard-earned cash for knobbly produce and smaller cuts of meat enticing? No. But these imperfections represent the USP of the organic system, an up-yours to high-input agribusiness using lashings of pesticides that help to provide buff non-organic fruit and veg (subject to ridiculous cosmetic grading) and clown-sized chops. Organic is really defined by what it doesn't contain and what hasn't been routinely sprayed on it - it attracts a price premium through the absence of pesticides, herbicides, antibiotics, et al.

In the UK 95% of a product's ingredients must come from organically produced plants and animals to be certified by a registered body. Organic hasn't been able to prove it is nutritionally superior (a 2009 Food Standards Agency report pooh-poohed this idea) and has even had its ecological worth questioned: researchers at Oxford university concluded that although organic crops are less polluting, leave better soil and support more wildlife (personally I would have thought you couldn't put a price on this) they are potentially more polluting per unit than non-organic.

Goodness. No wonder organic sales are on the slide here, and so is the amount of UK land being converted to organic (since 2008 it's fallen by 8.7%, to 656,000 hectares). But the Soil Association's 2013 organic market report shows that, since the start of the economic downturn, organic sales are up by 25% globally. So what does the rest of the world get that we don't? Or rather - what is it avoiding?

The answer, says the Organic Trade Board's upcoming report with the Pesticide Action Network, is "plate pesticides" - the traces of synthetic chemicals in a "balanced" diet, especially one rich in fruit and veg. Alarmingly, the report shows multiple pesticide residues have doubled, since 2003, to 46% of tested foods in 2011.

Among the substances discovered in bog-standard foodstuffs was the pesticide Chlorpyrifos, in some cases exceeding "safe" limits; DDT in 25% of fish and burger samples, and pesticides in 96% of flour tested, meaning there are residues in bread.

The results are shocking, but then non-organic producers are permitted to use 300 pesticides at any one time. But if, like me, you'd pay to avoid this and want actively to support the opposite system, then organic offers the simplest way, short of starting your own smallholding.

The World Stage Design exhibition (wsd2013.com) in Cardiff, on until 15 September, is an Olympics for theatre sets, costumes, props, lighting and special effects. This time the theme is sustainability, especially for costumes, which are usually custom made from scratch. But now the real visionaries are upcycling - minimising waste and cost but going big on expression and creativity. Shown here are outfits by one of the best upcyclers in the business: Marja Uusitalo, of Finland, whose ballet costumes for 'Whirls' are made from recycled and found objects.

Cheap flights, tax breaks on aviation fuel and globalisation make it hard to keep our feet on the ground. Binge flying makes a disproportionate contribution to climate-change emissions and suggests we're addicted to leisure travel.

If you have an ethical dilemma, send an email to Lucy at lucy.siegle@observer.co.uk

In Picture: Organic attracts a price premium because of what it doesn't contain and what hasn't been sprayed on it - pesticides, herbicides, antibiotics. Photograph: David Sillitoe for the Guardian.