Who invented the dal makhani? 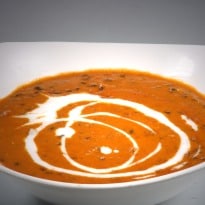 What does gold have to do with food? Well, I am writing about the black dal - yes humble black urad whole lentil whose avatar, the makhani dal, was invented by none other than Kundan Lal Gujral, the founder of the Moti Mahal chain.

He revolutionized the way dal was cooked, making it a household name, placing the humble dal on the world culinary map. The idea was triggered off when he invented the famous makhani gravy just to be able to serve the drying chicken tikkas by the tandoor waiting to be ordered but would sometimes dry out in the absence of a refrigerator in the good old days. He would just simmer those tikkas in this tomato gravy he invented, which gave birth to the much fabled butter chicken and the dal makhani.

Recently there was a debate upon who invented the dal makhani alias Moti Mahal dal.

As some remarked, the history of food is a very contentious subject. There is no final view about anything since no one left any written records. Rightly said, as we all know history takes many roads - sometimes written and sometimes hearsay and the last recorded one is what we believe in.

Being born in the Moti Mahal family and having a legendary grandfather who invented the tandoori cuisine, the butter chicken and dal makhani to begin with, I have grown up with people all over the world telling me tales about his inventions. Following the remark about history I started digging more for this black gold. The more I spoke to, people, especially senior citizens, all related the story which I grew up with.For the record, eminent journalist Vir Sanghvi, Gautam Anand of ITC Hotels and Manjit Gill, corporate chef of the ITC group, have all confirmed that Kundan Lal is indeed the inventor of dal makhani.

I rest my case.

Now, the much-awaited recipe of dal makhani from my book "Motimahal's Tandoori Trail"

Pick and clean the dals and rajma. Add salt and rub gently with both hands; rinse with water. Soak the mixture overnight in water.

Take a utensil with a heavy base, add the drained dal mixture and double the quantity of water; cook over low heat . At the restaurant, we put it in a tandoor for a while to simmer slowly.

Stir the mixture vigorously enough to mash it.
Once the mixture thickens add milk and cook till the milk is completely absorbed

Add the tomato puree and all spices; cook (for about 30 minutes) till grams and beans are tender.

Listen to the latest songs, only on JioSaavn.com
Add butter and cook for 10 minutes. Now add cream and stir for one-two minutes.

Picture Courtesy: IANS
The author, Monish Gujral, is the owner of the Moti Mahal chain, a restaurateur, chef and food writer.