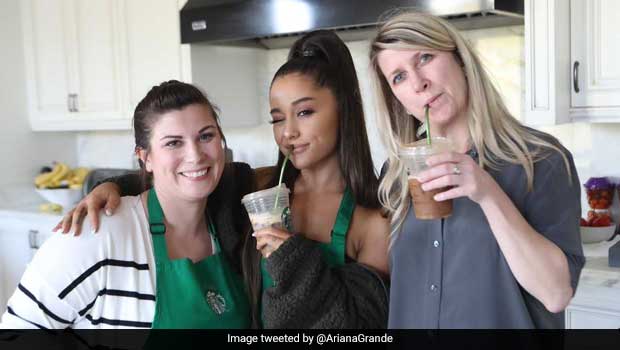 International coffee retailer and restaurant chain Starbucks just shared information about their new drink - Cloud Macchiato. After teasing their patrons with a series of cryptic posts on social media, Starbucks' social media pages shared the first look of the drink that is reportedly made by adding their trademarked cold foam. However, what's interesting about Starbucks' Cloud Macchiato is that American popstar Ariana Grande had a hand in coming up with the novel drink. The 'Thank You, Next' hit singer loves clouds and teamed up with Starbucks to release the drink that is now available in two flavours - cinnamon and caramel. This came after Starbucks left people confused with numerous posts with pictures and videos of clouds and cloud-shaped things.

Introducing new Iced Cloud Macchiatos in Caramel and Cinnamon. So light and fluffy they're basically a cloud in a cup.#CloudMacchiato

Excited about the release, Ariana Grande also tweeted about the new drink with a series of pictures of herself wearing the brand's barista apron and holding the new drink. She reportedly had a Starbucks barista make the drink for her at her place. She also urged her fans to try the soy version of the Cloud Macchiato. Grande has been known to be a fan of clouds and frequently uses the cloud emoji in her Twitter and Instagram posts. She had also used cloud emojis to tease her 2018 release, 'God Is A Woman', making it apparent that the popstar has an affinity for clouds.

Take a look at Ariana Grande's tweet from yesterday:

According to the information on Starbucks' website, the Cloud Macchiato contains ice, milk, brewed espresso, vanilla syrup, a flavoured sauce of choice and the star ingredient - a cloud powder which contains sugar, Arabic gum, egg white powder, rice protein, sea salt, xanthan gum and natural flavouring. The Cloud Macchiatos are only available in stores in the US right now.