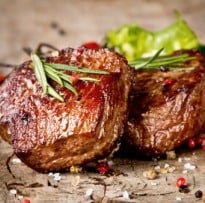 Nutritionists have always advised against eating too much beef as it's known to be extremely high on fat and cholesterol. Lean beef (anything that has round, chuck or loin in its name) has been suggested as an alternative but there was very little evidence to prove its health benefits. But, thanks to a new research that appeared in the Journal of Human Hypertension, beef lovers have a reason to cheer!

A study conducted at Pennsylvania State University found that nutrient-rich, lean beef when consumed daily can reduces blood pressure, which in-turn can help lower the risk of heart disease. Penny M Kris-Etherton, Distinguished Professor of Nutrition at Penn State and one of the researchers of the study said, "This research adds to the significant evidence, including work previously done in our lab, that supports lean beef's role in a heart-healthy diet."

The American Heart Association currently recommends the DASH eating plan (Dietary Approaches to Stop Hypertension) to lower blood pressure and reduce the risk of heart disease. People following the DASH diet are encouraged to eat fruits, vegetables, low-fat dairy and protein, predominantly from plant sources. Lean beef can be enjoyed as the predominant protein source in a DASH-like diet, along with fruits, vegetables and low-fat dairy, to effectively help lower blood pressure in healthy individuals. The DASH-like diet is also known as the BOLD+ diet: Beef in an Optimal Lean Diet plus additional protein.

Kris-Etherton along with four of her colleagues tested four diets, the healthy American diet (which served as the control), the BOLD+ diet, the BOLD diet and the DASH diet.
Listen to the latest songs, only on JioSaavn.com
The control diet consisted of 0.7 ounces of lean beef per day, while the DASH diet included 1.0 ounce. The BOLD diet had 4.0 ounces and the BOLD+ diet included 5.4 ounces of lean beef. Researchers tested the four different diets with 36 participants, between the ages of 30 and 65. All participants followed each diet at different times throughout the study period.

Subjects were randomly assigned an order to follow each of the four diet plans for five weeks each and were given a week's break between each new plan. Their blood pressure was recorded at the beginning and end of each diet period. It was found that the BOLD+ diet was more effective at reducing blood pressure when compared to the other diets.

CommentsResearchers concluded by saying that "This evidence suggests that it is the total protein intake - not the type of protein - that is instrumental in reducing blood pressure."