How To Make the Perfect Salted Caramel Sauce 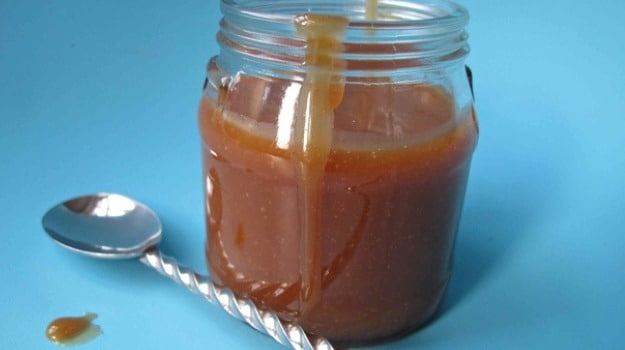 Is salted caramel a fad or the world's most delicious foodstuff? Does the sauce need any extra flavours - vanilla, rosemary, chilli - and what do you drizzle it on?

Salted caramel is one of those trends that came from nowhere, seemed daring for a bit (salt? In a sweet?), got all saucy with Nigella on the cover of a glossy magazine, and is now reduced to flogging overpriced milkshakes at my local multiplex, which presumably means its moment in the sun is over. But salted caramel could be as unfashionable as the sun-dried tomato and I'd still love it - once you've tasted that alchemic combination of bittersweet, toasty sugar, rich butter and salt, you can't go back.

Though caramel au beurre salé first pops up in Brittany, home to some of the world's finest butters, Nigella reckons it arrived on our shores from the other side of the Atlantic, rather than the Channel - which makes sense, given the Americans seem far more attuned to the pleasurable combination of sugar and salt than we are. Just think of their chocolate-covered pretzels, or bacon and maple syrup pancakes, or their enviable range of nut-based confectionary.

Indeed, when Marks & Spencer first launched a range of salted caramel chocolates back in 2006, they bombed until they removed the word salt from the label - Britain just wasn't ready for such culinary innovation. After seeing how popular the flavour was in the States, however, they tried again three years later - and now you can't move in there, or any other supermarket, for salted caramel ice-creams, nuts, brownies, even liqueurs, and, of course, the dangerously versatile salted caramel sauce.

Lovely as the bought versions are, there is far more chance to lick the spoon when you're making it at home - which is why I've selflessly taken on the task of making so many different versions. Might I also suggest, if you need any further excuse, that it is fabulous on pancakes - and Shrove Tuesday is on 17 February.

Sugar is the backbone of caramel. The quickest recipes, including Martha Stewart's and Nigella's, simply dissolve the sugar in fat (generally butter and cream) and stir until it darkens and thickens. Pastry chef and food writer David Lebovitz, the American website Food 52 and French gateau.com all caramelise the sugar in earnest before adding other ingredients. This gives a more complex caramel flavour (though I'm hard-pressed to criticise Nigella's sauce, which I find myself helpless to resist).

Stewart and chocolatier Paul A Young are the only people to deviate from white sugar, suggesting light muscovado. Though I love it, muscovado has quite a strong flavour that I find surprisingly overpowering in this context - though it works well in Young's version because of the chocolate he uses, of which more later.

Muscovado is also harder to caramelise, not only because the darker colour makes it more difficult to judge its progress, but because the molasses are prone to burning. On this occasion, I'll be sticking to ordinary white sugar - caster melts slightly more quickly, but I don't have a problem with the granulated stuff suggested by Lebovitz and Food 52, so use whichever you happen to have handy.

Butter is non-negotiable in a caramel sauce: Gateau leaves it out, and I miss its particular brand of richness. Nigella prefers unsalted, "because I prefer to be in control of salinity myself", but if you're adding salt to taste, it doesn't make much difference.

In its place, Gateau uses creme fraiche, while Lawson, Young, Food 52 and Lebovitz deploy it in combination with double cream, and Stewart mixes the butter with evaporated milk. The last is certainly a no-no as far; my schooldays featured endless metal dishes of tinned fruit dripping with the stuff, and its weird boiled flavour has no place in a caramel sauce.

Cream is a very good alternative; uncomplicatedly rich, it is this that makes Nigella's sauce so deliciously milky and dangerously easy on the palate. Gateau's creme fraiche intrigues me, however; though I think it has made a mistake by eschewing butter, I do approve of the tangy flavour it gives its sauce.

I'm going to use butter and creme fraiche in combination for a richly satisfying, well-rounded flavour. If you'd prefer a more straight-forwardedly sweet sauce, however, substitute double cream for the creme fraiche.

Salt is not the only option for a more savoury flavour in your sauce. Food 52 uses white miso (the mildest, sweetest variety of the Japanese fermented soya bean paste). It is an idea that has many fans - food writers Gizzi Erskine and James Ramsden rhapsodise about it online - but the umami-rich flavour is something I'm still trying to adjust to. I like it, but it wouldn't be my first choice to dollop over ice-cream.

Young melts in milk chocolate. As I'm just looking for a caramel sauce, I can't include it, but I can hint heavily that you ought to give his recipe a try if that sounds like something you'd like (if it doesn't, you need to take a long hard look at yourself). The recipe is in his book How to Make Chocolates.

Stewart adds vanilla extract to her sauce, but I'm not a fan of sticking vanilla in everything sweet - it's just not necessary here. If you must add extra flavour to your salted caramel, why not try something a bit more interesting, such as rosemary, or chilli? (And feel free to send me a sample.)

Put the sugar in a wide, heavy-bottomed pan and pour over the water, trying to wet all the sugar in the process. Swirl the pan if you have any dry bits. Set over a medium heat and keep an eye on it as the sugar melts and begins to brown. Make sure you have the other ingredients, measured out, within reach.

Once it turns a deep, but not dark, amber colour (about seven minutes), take it off the heat and whisk in the butter until it is completely melted, then stir in the creme fraiche (or cream) and 1/2 tsp salt (and other flavourings, if using).

Once you have a smooth sauce, scoop a little up on a teaspoon, allow to cool, and taste for seasoning; add more salt if you like. Use immediately, or store in a sealed container in the fridge. You can reheat as necessary, adding a little milk if it is too thick.

Salted caramel: a fad you'll be glad to see the back of, or the world's most delicious foodstuff (fact)? If you are a fan, what do you like to do with it - no Nigella fantasies please - and does anyone use it in savoury dishes?