How to Make the Perfect Som Tam 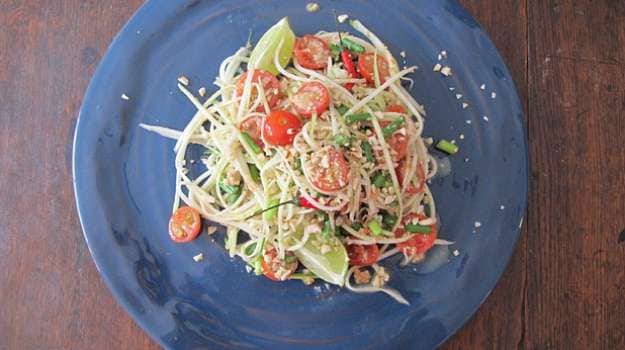 The perfect som tam. Photograph: Felicity Cloake for the Guardian

Addictively hot and refreshingly crunchy, this Thai staple has been called the world’s best salad. But how long should you pound those chillies and how do you master that all-important texture for the shredded ingredients?

This fiery little salad is one of Thailand's best known culinary exports (despite persistent rumours that it migrated over the border from Laos relatively recently) " and justly so. It's at once addictively hot and refreshingly crunchy; intensely savoury and insanely sour " in short, the flavours of south-east Asia on a plate, and the only salad to make it into the (extremely subjective) list of "the world's 50 most delicious foods" a few years ago. While fans of Ni"oise, caesar and tabbouleh may quibble with that particular accolade, I suspect they wouldn't argue with its inclusion on the list " especially in the sticky heat of a Thai July, when som tam's remarkable cooling properties come into their own. One to bear in mind if the British summer ever puts in a reappearance.

Interestingly, Leela Punyaratabandhu, author of the excellent She Simmers blog, explains in her book Simple Thai Food that the name som tam essentially means a salad made in a mortar, from an old dialect word for sour, and the verb "to pound" " so "though green papaya is the most popular main ingredient "... it is by no means the definitive ingredient".

Since moving to the US, she says, she has experimented with many different vegetables and fruits, including carrots, cabbage (as used by Allegra McEvedy), radishes, turnips, corn and "my current favourite "... som tam made with grated raw rutabaga [swede] and raw golden and candy-striped beets".

McEvedy who also suggests substituting cucumber in the absence of green papaya, perspicaciously observes that if you can't get it, "don't worry, it's all about the dressing". This is certainly true; green papaya has much more in common with the blandly flavoured cucumber than the sour green mango, for example " its role here is to provide crunch, which means that it is easily replaced by a deseeded cucumber or (better from a textural point of view, I think) courgette, kohlrabi or other root vegetable, though as Punyaratabandhu gently points out, it's wise to "know what som tam is like before you start deconstructing it".

David Thompson writes in Thai Street Food that the traditional way of preparing the papaya is "to hold it in one hand while it is cut and shredded vigorously with a large sharp knife held in the other hand. Every so often the knife is used to pare away the papaya, yielding a somewhat coarse, uneven shred". My large sharp knife skills are rusty, however, so I decide to opt for the more popular domestic option, a grater, which he acknowledges is "easier and faster" though "the uniform cut means the papaya loses some of its rustic appeal".

Rustic appeal be damned " I'm more concerned by the fact that, just as Punyaratabandhu warns readers, my box grater yields "a lacklustre result, limp, bruised strands that are much too short". A julienne peeler proves a much better tool for the job, though I also have a go at hand-cutting the fruit for the Hairy Bikers recipe, which, though time-consuming, gives pretty decent strands too. As (God help me) would a spiraliser, I imagine.

The other salad ingredients

Most recipes add snake (AKA yardlong) beans to the papaya. These can be easily found in Asian grocers, though the French beans suggested as an alternative by many recipes work in much the same way " their function is to supply extra crunch, so blanching them, as Molly Wizenberg suggests, seems the wrong way to go.

Tomatoes are the other constant, and again, for textural purposes I prefer the cherry variety; the larger ones I try in the recipe from Jean-Pierre Gabriel's Thailand go too mushy in the pestle.

Wizenberg also adds thinly sliced spring onions, which I don't think is necessary with so much garlic in the dressing. Which brings us on to "...

Every recipe I try contains garlic, chilli, fish sauce, lime juice and dried shrimp " which fits with Thompson's direction that som tam "should taste sweet, sour, hot and salty". The chillies, which should be the incendiary little bird's eyes rather than the big red milder sort suggested by McEvedy, must be sharp enough to pack a punch; the Bikers' one between four is not sufficient, while Gabriel's three between two makes my heart do funny things. Only you know how many you'll need to make your eyes water while your tongue begs for more, but Thompson also decrees they should be added late in the day, and barely crushed, rather than pounded into fiery smithereens as in some of the other recipes; observing the rule that "the more they are pounded, the hotter the dish " and how hot you want it is up to you".

Some recipes use tamarind water as well as lime juice " you can leave it out if you prefer, but I like the slightly more complex sweet and sour flavour it brings to the dressing. I would, however, omit the soy sauce McEvedy and the Bikers use for reasons best known to themselves " though it is common in modern Thai cooking, it doesn't taste right here to me, and the same goes for the Bikers' grated ginger.

Better to add sweetness in the form of palm sugar, if you can't find it; Punyaratabandhu's suggested substitution, soft light brown sugar, has a slightly similar caramelised flavour, and McEvedy's honey will do at a pinch. As long as there's something to balance out the saltiness of the fish sauce and shrimp, and the sourness of the lime and tamarind.

Those dried shrimp should be rinsed before use to slightly soften them, and, I find, they have more flavour if, like chef Andy Ricker, you dry fry them before adding them to the pestle. The same goes for the peanuts " and though I do enjoy Wizenberg's salted ones, the traditional plain variety are a happier fit with the saltiness of the fish sauce.

Wizenberg and the Bikers, who tie neck-and-neck for the title of this week's mavericks, both stick fistfuls of fresh herbs in their salads; coriander in the case of the former, mint and Thai basil for the latter. I'm never displeased to find coriander, in particular, on my plate (the mint and basil are too strong), but its soapy flavour does change the flavour of the salad quite considerably, so I can't in all conscience include it in the perfect recipe.

As the name suggests, this is a dish that requires a pestle and mortar or similar. In Thailand, they would use a clay version but a stone one is fine, as long as you are careful not to pound the ingredients too hard " the vegetables should be bruised, rather than crushed. (Wizenberg does not suggest using any kind of pestle and mortar, but as we've already seen, she's very much ploughing her own furrow with this recipe.)

McEvedy suggests adding brown shrimp, which works very nicely indeed if you'd like to make it a more substantial dish, and Gabriel advises serving it with grilled chicken, which is also a pleasing combination. Sticky rice is a must, however.

2-6 whole bird's eye chillis, depending on degree of bravery

Put a small frying pan on a medium-high heat. Rinse the shrimp, pat dry and then dry fry for about four minutes until crisp. Tip out and toast the peanuts until browned, then tip out, roughly chop and set aside.

Mash the garlic with a pinch of coarse salt in a pestle and mortar, then add the shrimp and two thirds of the peanuts and crush to a rough paste. Add the chillies and merely bruise (unless you want it really spicy, in which case pound away).

Add the beans, tomatoes and lime wedges to the pestle and roughly bruise, then scoop the lot out into a bowl (unless you have a very large pestle and mortar in which case you can leave them in).

Peel the papaya and cut into narrow matchsticks; a julienne peeler or mandoline is ideal, but you can use a sharp knife if not. Working in batches if necessary, lightly bruise in the pestle and mortar then add to the bowl.

Mix the lime juice, tamarind water, fish sauce and sugar in the pestle until the sugar has dissolved, then taste; it should be a balance of sour, salty and sweet. Adjust as necessary.

Toss the dressing and the salad ingredients together, making sure the peanut paste is well distributed, and sprinkle with the remaining peanuts before serving.

Som tam; is it really the world's greatest salad, and if not, what is? And what do you suggest as a good homegrown substitute for green papaya?