In A Hungry Venezuela, Buying Too Much Food Can Get You Arrested 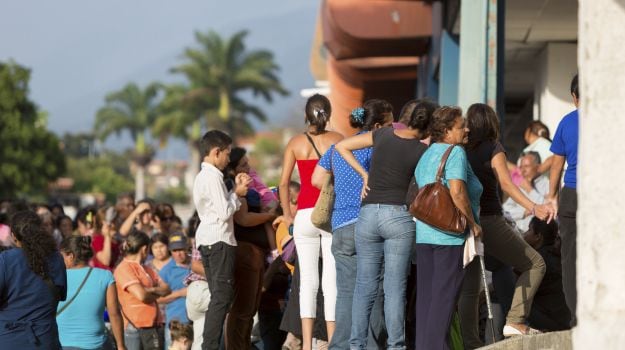 Highlights
BARQUISIMETO, Venezuela - The hunt for food started at 4 a.m., when Alexis Camascaro woke up to get in line outside the supermarket. By the time he arrived, there were already 100 people ahead of him.
Camascaro never made it inside. Truckloads of Venezuelan troops arrived in the darkness, arresting him and nearly 30 others seemingly pulled from the queue at random, according to his lawyer.

Camascaro, 50, was charged with violating laws against interfering "directly or indirectly" with the production, transportation or sale of food. He has been in jail for three months, awaiting a hearing.

"I went to see the prosecutors and explained that he was just buying some food for his family. He's not a bachaquero," said Lucía Mata, Camascaro's attorney, using the Venezuelan term for someone who buys scarce, price-capped or government-subsidized goods to resell on the black market.

Camascaro was snared in a new crackdown on Venezuelan shoppers, part of President Nicolás Maduro's attempt to assert greater control over food distribution and consumption.

The enforcement campaign appears to be sweeping up a significant number of ordinary shoppers, many of them poor, while achieving a kind of vertical integration of economic blame.

In a country with one of the world's highest homicide rates, and where carjackings, muggings and kidnappings often go unpunished, the Venezuelan government has arrested or detained at least 9,400 people this year for allegedly breaking laws against hoarding, reselling goods or attempting to stand in line outside normal store hours, according to the Venezuelan human rights organization Movimiento Vinotinto. Many were taken into custody by the Venezuelan troops assigned to police the checkout aisles and the long lines snaking from supermarkets.

Ismary Quiros, a deputy director at Movimiento Vinotinto, said the law doesn't define exactly what constitutes illegal hoarding, smuggling, or reselling goods. She said the government's real goal is to find scapegoats for the scarcities.

The queues typically materialize whenever high-demand, government-subsidized items arrive, such as corn meal or sugar. Those goods are among the few basics that remain affordable to ordinary Venezuelans who are paid in bolivares, the country's increasingly worthless currency. Other supermarket items that aren't price-capped are typically better stocked but out of reach to most families.

According to the Caracas-based rights group Provea, national guard troops have periodically carried out a mass-arrest operation nicknamed "Dracula's Bus" to round up Venezuelans trying to wait in line overnight for groceries, now a banned practice. More than 1,000 people were loaded onto buses in such sweeps last year and accused of being black marketeers, Provea researcher Intis Rodríguez said.

The operations appear to be expanding. Over one weekend in June, more than 3,800 people were detained in Barquisimeto, a city west of Caracas, for attempting to spend the night outside supermarkets, according to news reports.

Officials at Venezuela's justice ministry did not respond to requests for information about the crackdown.

In other Venezuelan cities, pro-government mayors have ordered alleged bachaqueros - named after a jungle ant that can carry loads many times its weight - to perform community service or clean the streets. "These people were not only denied their due process rights, but also they were also given punishments that aren't even established under Venezuelan law," said Rodríguez, whose organization has documented 60 such cases in the state of Yaracuy.

The crackdown began with Maduro's 2014 decree, the Law of Fair Prices, which was aimed at punishing businesses he said were "destabilizing" the Venezuelan economy. But few expected the government to apply the law broadly to ordinary consumers.

Clara Ramírez, an attorney in the state of Táchira along the border with Colombia, said since the beginning of the year she has represented six clients arrested after allegedly buying goods for resale on the black market. "All of them were normal people, men and women with families who were just looking for food to feed their children," she said.

Ramírez said her clients were typically released after a few days. But in a country where people who are awaiting a court hearing account for more than half of the prison population, many of the accused get stuck in jail for weeks or even months.

Some of those arrested in the crackdown were caught in possession of goods without receipts, or proof of how they obtained excess quantities of items such as rice, toilet paper or deodorant. Others had what soldiers deemed suspicious amounts of cash. Some, like Camascaro, aren't even sure exactly what they are accused of doing.

Raymar Tona, 34, was arrested on a Friday in May while waiting to buy diapers for her baby.
A national guardsman pulled her out of the supermarket line, burrowed into her purse and found 10,000 Venezuelan bolivares, she said. In the past, it would have been a lot of cash, but in today's Venezuela, which has the world's highest inflation rate, her bank notes added up to about $10.

"It was my salary for two weeks," said Tona, a receptionist at a medical clinic. She was accused of selling spots in line, a common practice.

After spending the weekend in jail, Tona said, she decided to plead guilty and was released
Maduro's decrees establish prison terms of up to 14 years for the worst black-marketeers. In June, he announced that he was creating a special jail "where we will imprison all those who are responsible for bachaquero crimes."

According to Venezuelan economist Sary Levy, as much as half of the country's workforce has come to depend on black market income to survive - selling food, moonlighting at second jobs, or hawking goods on the street. With annual inflation running at more than 700 percent, "it's normal that formal jobs become unattractive," she said, and people try to sell whatever they can to get by.

With prescription drugs and hospital supplies also running low, Venezuelans in desperate straits have found themselves accused of hoarding medicine.

Isaura Pérez, 66, said she traveled three hours to Barquisimeto in July to deliver hard-to-find drugs for her 38-year-old diabetic cousin, Georgina Delgado, who was in intensive care. National guard troops arrested Pérez at the hospital entrance for allegedly trafficking medical supplies, she said.

Promoted
Listen to the latest songs, only on JioSaavn.com
The drugs were confiscated by the soldiers, Pérez said. Her cousin Delgado died three days later.