Janhvi Kapoor Binging On Fries In New York Is The Most Relatable Thing On Internet Today!

In one of her recent Instagram stories, we learned that she ate fries five times in two days! 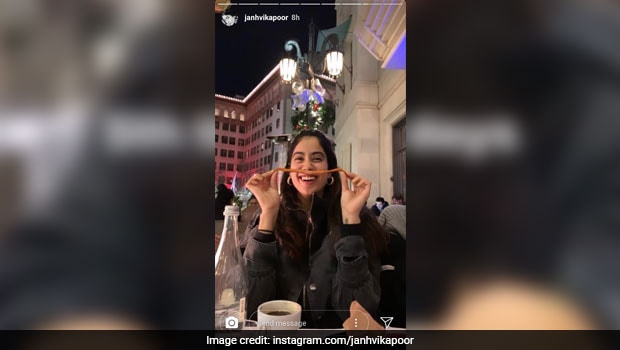 Janhvi Kapoor has never shied away from displaying her foodie side on social media, only this time it is way too relatable. Janhvi, who is visiting her sister Khushi Kapoor in New York, is indulging her heart out in the city. In one of her recent Instagram stories, we learned that she ate fries five times in two days! She also says that they are so good, she is having them like 'chawal (rice)', and she sounds anything but guilty. Yes, you can take a moment and pray for the same kind of metabolism, or take a cue from her strict fitness regimen, which allows her to binge every once in a while. Janhvi tries to hit the gym at least once a day. Her peers from the industry like Ishaan Khattar and half-brother Arjun have often commended the actress for her diligence towards fitness in their interviews.

Janhvi created ripples online for her recent foodie outings in Punjab. From dal makhani, saag, makki ki roti to lassi - Janhvi ate her heart out in her short stay. Janhvi is currently spending some quality time with her friends and family abroad. On work front, she has quite an eventful year lined up ahead of her. She would be seen essaying the role of pilot Gunjan Saxena in her biopic. She would also be seen sharing screen space with Rajkummar Rao in 'Roohi Afza'. Janhvi is also one of the leads in Karan Johar's medieval drama 'Takht'.