In an Instagram story Janhvi Kapoor gave us a peek into Pal Dhaba's famous Dal Makhani with a pool of butter floating on top. 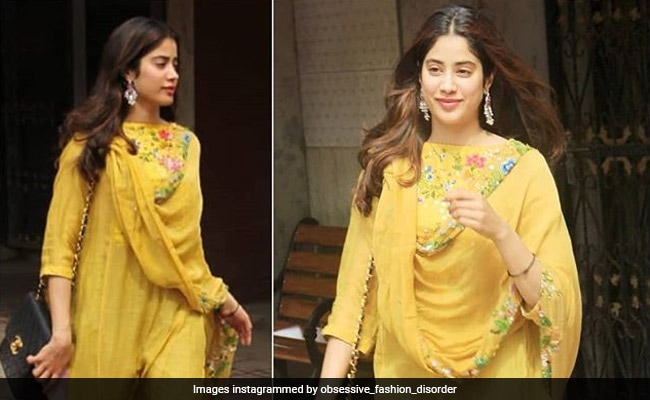 Janhvi Kapoor's Instagram is buzzing with her foodie outings

Janhvi Kapoor seems to be making most of her Punjab visit. Her Instagram is buzzing with her foodie outings and we cannot help but drool each time she puts up a picture of a local delicacy she happened to try. A few days back, she was seen relishing a tall glass of lassi, makki ki roti,Amritsari kulcha, sarso ka saag and chicken. On Tuesday, she posted a picture of her sitting with her friends at Pal Dhaba, Sector 28, Chandigarh. Looking at the table, it looks like she and her pals had quite a feast. In another Instagram story that she posted soon after, she gave us a peek into Pal Dhaba's famous Dal Makhani with a pool of butter floating on top. 'Dal Makhni or Makhni Dal?' she captioned the image. Janhvi is a self-confessed foodie; she revealed in an interview that she enjoys Rajasthani 'laal maas'.

Pal Dhaba is a famous Chandigarh eatery, known for its authentic Punjabi food. They also serve some Italian and Chinese snacks. Some of the hit-selling items of the place are butter chicken, dal makhani, chana masala, keema kaleji, butter naan and lassi.

Janhvi debuted last year with 'Dhadak'. She has been roped in for the lead cast of Dostana 2, wherein she'd be seen sharing screen space with Kartik Aaryan. She would also be seen in 'Roohiafaza', starring opposite Rajkummar Rao. Another much-awaited project of the actress is pilot Gunjan Verma's biopic, which is slated to release soon.

Pal Dhaba is a famous Chandigarh eatery, known for its authentic Punjabi food.

Dal Makhani is one of the hit-selling item of Pal Dhaba.
Janhvi is known to be a foodie since she keeps sharing her food shenanigans with her fans on social media.