Janhvi is a self-confessed foodie, and in her recent visit to Amritsar, Kapoor went on a Punjabi binge spree of sorts. 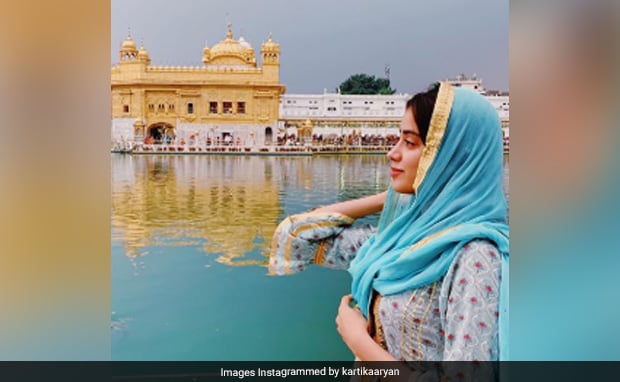 Janhvi is a self-confessed foodie

Janhvi Kapoor, who debuted last year with 'Dhadak', has her hands full with many exciting projects. Ever since her entry in Bollywood, Janhvi has been seen as one of the fittest stars of the industry. According to her friends and peers in the industry, Janhvi loves to hit the gym whenever she gets time. But her Instagram feed suggests that she also likes to indulge once in a while. Janhvi is a self-confessed foodie, and in her recent visit to Amritsar, Kapoor went on a Punjabi binge spree of sorts. In her Instagram story posted on Thursday, Janhvi can be seen chugging  a tall glass of lassi topped with creamy malai, post which she went on to savour some makki ki roti, sarso ka saag, laccha paratha, Amritsari kulcha, maa ki dal, paneer and other curried preparations at a local eatery in Amritsar. Here are the pictures.

Do you see all that butter floating on top of those dishes?! Well, you are not the only one drooling. She also visited the Golden Temple and posted pictures outside the same yesterday.

This is not the first time that her foodie escapades have made news. During the shoot of Dhadak, Janhvi admitted to have developed a deep penchant for Rajasthani food. In one of her interviews, she revealed that she loves laal maas. In her trip to Lucknow last year, she also reveled in a number of kebabs and Awadhi delicacies.

Janhvi would be seen in Gunjan Saxena's biopic, which is slated to release early next year. She has also been roped as a lead actress in Roohi Afza, wherein she would be sharing screen space with Rajkummar Rao for the first time. There were also reports of her being signed by Zoya Akhtar for her web film.