Make your own hot buttered rum 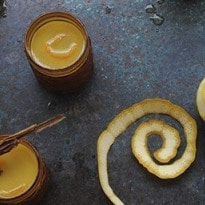 Henry cannot claim to have invented hot buttered rum, but why not warm yourself up from the inside out with this sailors' favourite...

I was briefly stuck on a fort in the Solent last weekend, on account of the high winds.

As spray whipped against the concrete walls and sea and sky became one, I fell into a conversation about rum with a sailor who had read the dark rum sour recipe in this column. The one I named the Timenoguy.

I had not invented it, he said; the British navy had for years added lime juice to the daily tot of rum. They mixed the two liquids and kept them in barrels.

The rum prevented the lime juice from going off and the lime juice protected the sailors from scurvy. There is nothing new in this world - although I argued that the addition of an egg white and some violent shaking give me naming rights.

I can claim no such originality for this week's rum-based recipe: there are references to hot buttered rum in this country from the days when barrels of the fermented sugar cane were first landed in our ports. But it is perfect for this time of year and a particularly good alternative to mulled wine on bonfire night.

Where mulled wine can be simultaneously too acidic and sickly sweet, buttered rum is rich, syrupy, and deeply comforting. It is a great big hug of a drink. It slips into the stomach and then radiates out to the extremities. The cheeks glow red. Fingers feel cosier in gloves. And you get a little warm tickly feeling at the end of your nose. Very pleasant indeed.

1 Beat together the butter and maple syrup in a small bowl. Add the rum and orange peel.

3 Place cinnamon stick in the glass. Pour over the hot rum. Stir using the cinnamon. Serve.