Marcella, who Taught Americans How to Cook Italian Food, Dies at 89 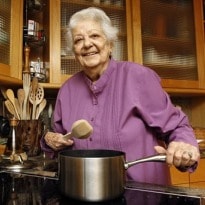 Marcella Hazan, the Italian-born cookbook author who taught generations of Americans how to create simple, fresh Italian food, died Sunday. She was 89.

Hazan died in the morning at her home in Florida, according to an email from her son, Giuliano Hazan, and posts on Facebook and Twitter from her husband and daughter-in-law.

Hazan was best known for her six cookbooks, which were written by her in Italian and translated into English by Victor, her husband of 57 years.

The recipes were traditional, tasty and sparse -- her famous tomato sauce contained only tomatoes, onion, butter and salt -- and mirrored the tastes of her home country, where importance is placed on the freshness of food, rather than the whiz-bang recipes inside a chef's mind.

She eschewed the American-style Italian food that suffocated mushy pasta in grainy meatballs and tasteless cheese. She begged home cooks to use more salt and once wrote that if readers were concerned about salt affecting one's life expectancy, to "not read any further." On the topic of garlic, Hazan took a sharp view.

"The unbalanced use of garlic is the single greatest cause of failure in would-be Italian cooking," she wrote in her 2004 cookbook "Marcella Says..." ''It must remain a shadowy background presence. It cannot take over the show."

Marcella Pollini was born in 1924 in Cesenatico in the Emilia-Romana region of Italy. She didn't intend to be a professional cooking teacher or author; she graduated from the University of Ferrara with a doctorate in natural sciences and biology.But then she met Victor Hazan, who was born in Italy but raised in New York. The couple married in 1955 and moved to the U.S., and she realized she needed to feed her husband, who longed for the flavors of Italy. One year, she went to take a Chinese cooking class, but the instructor canceled the class; the other students decided they wanted Hazan to teach them to cook Italian food.

So she began offering cooking classes from her New York City apartment. Those classes blossomed into a lifelong business of teaching. She and Victor opened a cooking school in Bologna, then in Venice, where classes took place in a 16th century palazzo with a custom designed kitchen.

Hazan gave birth to a son, Giuliano, in 1958. He shared his parents' love of food and also became a cookbook author. Giuliano and his wife run a cooking school in Verona. He also makes frequent visits to the "Today" show, teaching his mother's recipes. Earlier this year, Giuliano Hazan published "Hazan Family Favorites," drawing on his memories of his parents and grandparents and the food they ate for decades.

It was Hazan's 1973 cookbook, "The Classic Italian Cookbook," that led gourmands to draw comparisons between Hazan and another larger-than-life cookbook author: Julia Child, who wrote "Mastering the Art of French Cooking" and hosted the long-running TV cooking show, "The French Chef."

The two women were longtime friends; Child told People Magazine in 1998 that Hazan was "forbidding because she's rough ... that's her manner, and she's got a good heart."

Marcella and Victor Hazan retired to a condo on Longboat Key, Florida, in the late 1990s. There, the couple renovated the kitchen, which overlooked the languid blue waters of the Gulf of Mexico. Punctuated by calls and visits from fans and reporters -- and occasionally making appearances in her son's cookbooks and at cooking classes in the Northeast -- Hazan returned to the thing she loved doing most: cooking for her husband.

On Sunday, Victor Hazan wrote on Facebook: "Marcella, my incomparable companion, died this morning a few steps away from her bed. She was the truest and best, and so was her food."

In 2004, Marcella Hazan wrote, "Simple doesn't mean easy. I can describe simple cooking thus: Cooking that is stripped all the way down to those procedures and those ingredients indispensable in enunciating the sincere flavor intentions of a dish."

Hazan said the Roman dish spaghettini aio e oio -- thin spaghetti with garlic, oil, parsley, chili pepper and nothing else -- embodies the simple-yet-complex nature of Italian food. Dishes should nourish and please, she added, not "dazzle guests with my originality or creativity."

Comments"I am never bored by a good old dish and I wouldn't shrink from making something that I first made fifty years ago and my mother, perhaps, fifty years before then," she wrote. "I don't cook 'concepts.' I use my head, but I cook from the heart, I cook for flavor."