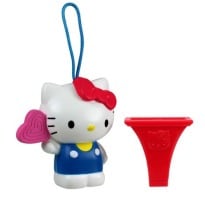 McDonald's is recalling a Hello Kitty-themed whistle given to children in Happy Meals, citing a chance they could choke on some of its parts. The U.S. Consumer Product Safety Commission said that two children have reportedly coughed out pieces of the whistle that they had sucked into their mouths, including one child who received medical attention.

Promoted
Listen to the latest songs, only on JioSaavn.com
The safety agency said that parts of the three-inch-tall "Hello Kitty Birthday Lollipop" whistle can detach and be inhaled, posing a risk to small children.

McDonald's said about 2.5 million whistles were manufactured, but most were not sent to restaurants. The fast-food chain said it has recovered about 1.6 million whistles, including toys that never made it to its stores. The toys were in Happy Meals and Mighty Kids Meals in the U.S. and Canada in October and November.

CommentsConsumers should return the whistle to any McDonald's for a free replacement toy.