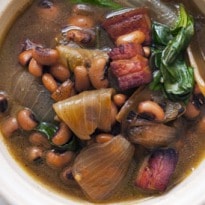 A substantial soup bolstered by beans.

Melt a thick slice of butter in a deep pan and cook a roughly chopped large onion in it until soft and pale gold. Cut a thick slice of pancetta, about 100g in weight, into cubes and add to the onion, cooking them until the fat becomes translucent. Tip in a 400g can of black or black-eyed beans, add a bushy rosemary sprig and 800ml of vegetable stock, then simmer for 15-20 minutes. Season generously, add a handful of whole basil leaves, then serve. Enough for 4.

Keep the onion pieces large and chunky, but cook them for a long time, covered with a lid. They will soften in large silky pieces. Slow cooking will sweeten them, too. Use thick slices of pancetta cut from the whole piece rather than the thin slices in plastic packs - the flavour will be better and you will have neat lumps of meat in your soup.

Swap the black beans for cannellini or haricot. Introduce a clove of garlic, finely sliced, a few more herbs, thyme or tarragon, or sharpen with lemon at the end of the cooking. Float a slice of bread on top, smother with grated cheese and grill or bake until it melts.

'Keep the onion pieces large and chunky, but cook them for a long time. They will soften in large silky pieces': Nigel Slater's black bean and onion soup. Photograph: Jonathan Lovekin for the Observer