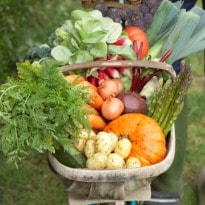 Farmers of a village in Bihar's Nalanda district are planning to go global. Potatoes, pumpkins, garlics, chillis and ladyfingers, among other vegetables, produced in Sohdih village are all set to make their way to kitchens in Europe.

The farmers are eyeing to export organic vegetables to Britain, France, Germany and other European Union countries after their village was awarded the prestigious C3 certificate by the Ecocert, France-based inspection and certification body.

The organic vegetable growers in this village are overjoyed as theirs is the first village in Bihar to obtain the fully organic status.

"It is bound to provide us a lifetime opportunity to send our produce, mainly organic vegetables, to international and national markets. We also hope to earn more," Rakesh Kumar, a farmer, told IANS..

Another peasant Ritesh Prasad said he too was looking forward to "prosperity from export of organic vegetables".

Mahto told IANS by telephone that it took nearly two years for the farmers to move from chemical to organic farming.

"Their hard work has paid off, now they can export organic vegetables," he said.

R.K. Sohane, director extension education, Bihar Agriculture University, Sabour, said that it will change the face of the village and its neighbourhood."Now the farmers of this village will get a chance to have tie-ups with export companies of international firms to sell their produce," he said.

According to district agriculture officials, it is a matter of pride for the state that a village had got such a certificate.

"It is not a mean achievement. The farm produce are tested for 118 chemicals, pesticides and fertiliser with chemicals like endosulfan, chlordane and lindane. The certificate is given only when no residual traces are found," they said.

Kumar said that some Mumbai- and Kolkata-based companies dealing in organic products had started placing enhanced orders for vegetables, including potato, pumpkin, garlic, chilli and ladyfinger with the farmers associated with Sher-e-Bihar Sohdih Krishakhit Samuh.

Mahto said that application for C3 status for over 900 hectares is pending .C1 and C2 certificates are given in the first and second year after chemical use on land is stopped by farmers.

After Ecocert certification, a few Mumbai- and Kolkata-based companies have shown interest for setting up their procurement and collection centres at Biharsharif, the district headquarters, and in Patna, he said.

Bihar Chief Minister Nitish Kumar is keen to promote organic farming in Nalanda, his home district, about 100 km from Patna.

Bihar is turning its attention to popularising and promoting organic farming in the state to usher in a new "Green Revolution" in agriculture.

Nitish Kumar's government has decided to promote organic farming in at least one village of the state's 37 districts. It launched an "organic farming promotion programme" over a year ago, intended to develop organic 'grams' (villages).

A sum of Rs.255 crore ($50 million) has been sanctioned for the development of organic farming, said an official of the agriculture department.

"Initially, the farmers were reluctant to adopt organic farming despite the state government providing free seeds, fertiliser and experts to guide them. But now more farmers have shown interest in it," said a district official in Nalanda.

Last year, a young farmer of Darveshpura village in Nalanda district set a world record in potato production through organic farming. Earlier, farmers of the same village had created a world record by producing 224 quintals of paddy per hectare.

The chief minister has repeatedly said that he wants to have one or two agriculture products from the state on the plate of every Indian in the coming years.

"Several steps, including promotion of modern techniques of farming, organic farming and use of improved seeds, have been taken in the last two-three years, but it is still a long way to go in developing the agriculture sector," said an agriculture department official.

CommentsAgriculture is the backbone of Bihar's economy, employing 81 percent of workforce and generating nearly 42 percent of the state's domestic product, according to the state government.