India is a versatile nation with various cultures that are intertwisted yet independent. Each state has its own culture and way of living which in some way or the other reflects in their respective foods too. 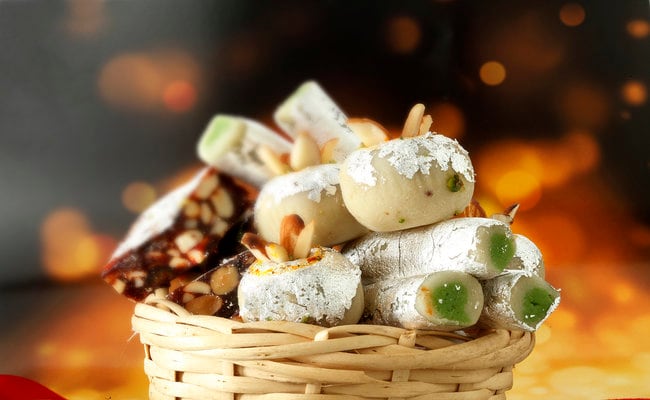 India is a versatile nation with various cultures that are intertwisted yet independent. Each state has its own culture and way of living which in some way or the other reflects in their respective foods too. Be it music, art or food, each state offers its share of authentic and remarkable specialties. India is a land of festivals and celebrations in almost all parts of the country are synonymous with desserts. Indian desserts are quite popularly known for their finger-licking taste. Here is a list of 29 desserts from each state of India which will end up making you crave for almost everything. Read on to know more.

Pootharekulu Kunda: It's a delicious rice dessert which is loved and relished by many people. It has a paper-thin texture and offers many varieties that can be stuffed with ingredients such as jaggery, powdered sugar, dry fruits and even chocolate powder.

Khapse: It is widely made during the Tibetan/Sherpa new year. These sweet biscuits are deep fried and are served in various sizes and shapes.

Komolar Kheer: Also known as orange kheer, Komolar Kheer is a popular Assamese dessert which is made using almonds, milk, orange pulp and cashews. It may taste quite different but is definitely interesting in its own way.

Thekua: Thekua is famous dessert from Bihar. It is made from chashni, flour, ghee and jaggery. It is often used in Chhath puja as a ritual offering to god.

Til ke Ladoo: Til ke Ladoo is a famous dish from Chhattisgarh which is made using roasted sesame seeds. It is then mixed with jaggery and peanuts and later converted into ladoos. It is usually prepared on Makar Sankranti festival.

Ghari: Ghari is a very famous dish from the state of Gujarat. They are maida puris which are stuffed with nuts and mawa. It can be made with various flavors like almonds, mawa, pistachos and elaichi as well. It is usually prepared during Diwali.

Aloo ka Halwa: You can even call it a potato pudding. This dessert is made at the time of Ekadashi. It is prepared using boiled potatoes and desi ghee.

Patande: It is a famous dish of the Sirmaur district. These Indian pancakes are extremely smooth in texture and made out of batter which consists of sugar, milk and ghee.

Kashmiri Shufta: Shufta is a Kashmiri dry fruit dessert delight which is extremely pleasing to the palate. This dessert is made from paneer, dry fruits and sugar. It's royal in its own way!

Malpua: This luscious sugary pancake is a classic dish in Jharkhand. It is prepared with sugar, milk, flour and bananas and then fried in desi ghee. It is a must try dessert if you ever visit Jharkhand.

Palada Payasam: This sweet payasam is one of the most cherished delights of Kerela. It is made with rice, cardamom and butter. It is best enjoyed when garnished with raisins and cashews.

Koat Pitha is a fried dish which is made using rice flour and bananas as major ingredients. It looks crispy from the outside but is really soft and warm from the inside. It usually tastes sweet because of the presence of bananas.

Puran Poli is a traditional Maharashtrian dessert which is usually made on special occasions. Its stuffing is prepared using chickpeas and jaggery. Whereas, the poli is made with pure desi ghee, milk and flour.

Pukhlein: This Meghalayan dessert is made from powdered rice and jaggery, which is most often fried. It is also known as sweet bread in Meghalaya.

Madhurjan Thongba: This dish is made with gram flour which is later sweetened with milk and coconut. This beautiful blend is loaded with flavours.

Mawa Bati: Madhya Pradesh is known for its street food and marvellous desserts. This mawa bati is a remarkable dish in Madhya pradeesh and is made with mawa, cardamom powder, sesame seeds and of course pure desi ghee.

Nap Naang: Isn't the name interesting? This Nagaland speciality is made with black rice, water, sugar and milk. The use of black rice gives it a dark purple color. It is extremely easy-to-make and tastes delicious at the same time.

Chhena Jhili: It is one of the most popular desserts in Odisha. It is made with the help of fresh cheese and sugar syrup and later it is fried.

Khoya Barfi: Khoya is a dairy product which is made by drying the whole milk. Khoya and cashews are primarily used for the preparation of this barfi. These barfis are usually prepared on Lohri.

Churma Ladoo: This Rajasthan speciality is made using besan, jaggery, suji and cardamom powder. They taste the best when paired with a warm glass of milk.

Sel Roti: This sweet dish is quite famous in Sikkim. It's basically a sweet bread which is made out of ground rice, sugar and banana.

Arisi Thengai Payasam: A traditional Tamil meal would definitely be incomplete without this dessert. It's more like a kheer which is made from the coconut, rice and jaggery.

Boorelu: This traditional sweet is usually prepared during special occasions and festivals. It is made from Bengal gram, coconut, cardamom powder and jaggery.

Awan Bangwi: Awan Bangwi is only found in Tripura. It is traditionally made from sticky rice, cashews, raisins and desi ghee. It's served on banana leaves.

Bal Mithai: This one is perfect for people who have a sweet tooth. Bal mithai is made using roasted khoya and then covered with tiny sugar balls.

Malaiyo: Malaiyo is one of the most cherished desserts in Uttar Pradesh, especially during winters. It's mildly sweet in taste and literally melts in the mouth. It tastes the best when garnished with kesar and dry fruits.

Mishti Doi: This sweetened yogurt is prepared with milk and caramelized sugar which enhances the taste. It is usually served in an earthen pot as it has the ability to absorb excess water, making it easy for you to eat.

This sweetened yogurt is prepared with milk and caramelized sugar

Promoted
Listen to the latest songs, only on JioSaavn.com
So, make the most of this Republic Day by indulging in these traditional sweets from across the country.