The Cronut - the US Pastry Sensation That Must Cross the Atlantic 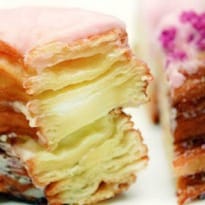 These blends between croissants and doughnuts are all the rage in New York, but have yet to make it to the UK. So can you replicate them in your own kitchen?

What do you get when you cross a croissant with a doughnut? Introducing: the Cronut, currently the most sought-after snack on earth. Cronuts have had a rapid rise to fame. New York bakery Dominique Ansel sold its first batch of the portmanteau pastries on 10 May. Within days, pictures of the Cronut had Harlem Shaked their way across the internet, and lines began forming outside the bakery at 6am. Dominique Ansel currently makes just 200 of its trademarked $5 Cronuts a day. Celebrity fans include Hugh Jackman and CNN's Anderson Cooper, and, according to Time magazine, a Cronut black-market has sprung up with pastries selling on Craigslist for around $40. Imitation "doissants" have also gone on sale in the US and Australia.

French chef Ansel tells me he came up with the idea when he decided to "make a doughnut as a staff snack. But I didn't really ever make a doughnut, so I did it my way and infused it with a croissant." They took two months to perfect and "the first couple were a mess". The perfected Cronut has a "texture inside very similar to a croissant - light, flaky layers that peel off. And the cream, outside crispiness, sugar texture, and glaze is just like a doughnut". The instant success of the Cronut is, according to Ansel, a happy accident. "We don't have a PR company; there was no strategic marketing meeting."

But short of hopping on a plane to JFK, how can we get our hands on one in Britain? Until bakeries here launch their own (my money is on a US-style joint in London like Electric Donuts), the answer is to make them yourself. I am attempting to do just that - despite a warning from Ansel: "It's not something I would recommend for home cooks as it's so labour intensive. It can come out really gross, if not done well."

Duly daunted, I call Jo Wheatley of The Great British Bake Off fame for advice. Wheatley tried making doissants after a friend came back from the US raving about Cronuts. "Give yourself plenty of time," she says, "you need to make the dough the day before".

Edd Kimber, winner of the first Bake Off, also has his own version - calling them "fauxnuts". Croissants are made with laminated pastry - a notoriously tricky and time-consuming dough. Kimber used a quick 20-minute croissant dough, similar to rough puff pastry. This sounds less scary, so I call him for some pointers. "Use half plain flour and half strong bread flour," he advises. "You don't really knead the dough - just gently bring it together."

Kimber's quick croissant dough is fairly easy to make - you fold it into a ball before chilling it in the fridge for a few hours. Before bedtime, I roll it out and "fold it like a business letter", according to instructions, before refrigerating overnight. Be warned, the dough is quite sticky and you need to liberally flour the worktop.

The next morning, I prep the extras - lemon sugar to dust the doissants, custard for the filling and glaze for the top. Ansell changes his Cronut flavours on a monthly basis - so far these include rose vanilla and lemon maple, but today I'm following Edd's recipe for lemon and vanilla fauxnuts.Once I have cut the fauxnuts out with a cutter, I follow Wheatley's tip and firm them in the freezer.This helps keep their shape and to push up the croissant layers once they hit hot oil. I plunge them into the deep-fat fryer until they are a rich gold. Once cooled, I roll them in powdered sugar, pipe glaze on to the top and squirt the custard inside with a nozzle. They taste like a croissant liberally doused with sugar, with a crunchy exterior. My layers aren't as elevated and airy as Edd's or Ansel's and there's custard leakage, but I'm pretty chuffed with the results. "You made what?" says my dad when I pop round for a second opinion. "Delicious, just like a croissant, though why isn't it crescent-shaped?" is his verdict.

Given how good these fauxnuts are, I have now got an inkling of how extraordinary the real Cronuts must be. However, in the time it has taken to proof the dough and make them, I could have flown across the Atlantic to the bakery. This is probably a good thing - if Cronuts were quick and easy to make, our waistlines would all be in trouble.

• This article was amended on 6 June 2013. One of the photo captions misspelled Edd Kimber's name as Add Kimber. This has been corrected.