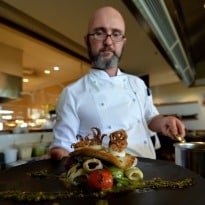 A vanguard of South African chefs are dusting off unfashionable cooking techniques used by 18th century Dutch settlers -- like pickling, salting and smoking -- to create a modern "sustainable" cuisine.

A lot of what chef Chris Erasmus works on at his upscale restaurant in the Cape winelands has not been in vogue, or even necessary, since fridges were first sold over a century ago.

But the former chemical engineering student is determined, with the help of a little scientific know-how, to resurrect a centuries-old way of approaching food that seems anathema to modern life.

Some of Erasmus's preparation methods, once essential to keep local produce edible through the winter, can take weeks, months or even a year to complete.

But they make the most of ingredients that do not need to be flown in from around the world.

"We are using old techniques with modern science," he said toying with a puffed-up, week-old vacuum pack of salted raspberries.

Inside the plastic pouch the blood-red berries are being pickled using heterolactic fermentation, a chemical process that converts glucose into lactic acid, preserving the fruit in the process.

To this age-old technique Erasmus adds salt and low oxygen levels, helping the process move along and preventing the build-up of bacteria we now know is harmful.

Once the fermentation is completed the berries can be dehydrated, stored and reconstituted with water whenever needed.

The end result is an ingredient that has little in common with the vinegar-tinged tastes commonly associated with pickling.This is no throat-burning bar snack, soggy fast food garnish or bland central European stodge.

"It's got a beautifully savoury raspberry smell and it's got 10 times the flavour because of the fermentation," he said.

'They knew exactly what they were doing'

The groundwork for this new old cuisine may have come from the likes of Topsi Venter -- a now-retired female chef who went from working on the South African Dried Fruit Board to opening restaurants that dug deep into the terroir to redefine local food.

But Erasmus -- along with other like-minded South African chefs such as Margot Janse and Richard Carstens -- stand at the confluence of many food movements that have grown over the last decade around the world.

They dip into the use-it-all ethic of head-to-tail butchering, the scientific adventurism of molecular gastronomy and the locavore drive for seasonal food sourced from nearby farms.

For this reason Erasmus's menus at the Pierneef restaurant -- located in the La Motte vineyard beneath steep granite slopes that dot South Africa's Western Cape -- are often short on specifics.

"It will say Karoo lamb, it won't say what cut. So we'll first use the neck then the shoulders, then the ribs, then the legs, until there is nothing left."

Angus McIntosh, a former Goldman Sachs broker who left investment banking to set up an biodynamic farm near Stellenbosch, supplies Erasmus and dozens of other local restaurateurs.

He said demand for his pasture-reared products has increased dramatically in recent years as people become more concerned about how and, as importantly, where their food is produced.

"It's not just a trend anymore," said Erasmus. "It's becoming a guideline for the top chefs, if you have Canadian scallops on your menu someone is going to call you and say 'un-uh' get it off, let's not do that'."

But the thing that binds these ethical and locavore influences together for Erasmus is old-time cooking used by the voortrekkers, the Dutch immigrants who settled across southern Africa in the 1800s.

"Back then they knew exactly what they were doing, and it was forgotten for a while. Now we have a better understanding of the science behind it, and it makes sense."

In that sense his approach is similar to the retro ethos which catapulted Copenhagen's two Michelin starred Noma restaurant and its "new Nordic cuisine" to international fame.

"One of my favourite dishes is our salted lamb rib, which we found in very old recipes," said Erasmus.

For this dish the rib is rubbed with a spice used to make beef jerky or biltong, South Africa's homegrown variety of cured meat. Hung in a chimney for two weeks, "it slowly pickled, cured and smoked," he explained.

It is then taken down, cooked, then cold dried, and when it is needed sliced on hot rocks. The end result is "almost like a lamb pancetta", he said.

According to Jean-Pierre Rossouw, local food critic and author of an eponymous restaurant guide, this blending of the old and the new in South African cuisine is both "very exciting" and "long overdue."

"Food is very much a combination of roots, heritage and modern culinary technique and innovation," he said.

Listen to the latest songs, only on JioSaavn.com
"And when heritage meets innovation, your cuisine really moves forward."

Perhaps necessity is the mother of invention, even a hundred years after the necessity has disappeared.