Why Flat-Leaf Parsley is Good for You 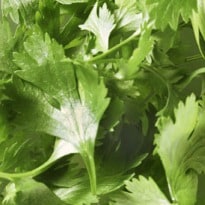 This versatile herb is bone-strengthening, breath-freshening, boldly flavoured - and far more useful than its curly cousin.

When food comes garnished with a solitary sprig of curly parsley, it flags up a dish that's retro - not in an attractively nostalgic way - and a cook who has run out of ideas, even confidence. Freshly picked curly parsley can be sweet and wonderful, but the shop-bought stuff more often than not brings more of a texture than a taste, and is usually an irritating, irrelevant and prissy presence on the plate.

Flat-leaf parsley, on the other hand, is a different ball game. Armed with a leafy bunch - think in terms of generous handfuls, not sprigs - you have a strong, clean, assertively "green", almost grassy flavour at your disposal, one which is more versatile than any other herb's. And that easy-on-the-eye verdant colour does wonders for the visual appeal of so many dishes.

Why is parsley good for me?

Parsley is rich in bone-strengthening vitamin K. It is also an excellent source of vitamins A and C and a number of flavonoid compounds, such as luteolin and apigenin, all of which appear to have an antioxidant effect: that is, they render harmless free radicals that would otherwise cause oxidative damage to cells. The chlorophyll and essential oils in parsley freshen the breath and are thought to have an antibacterial effect.

Where to buy and what to pay?

Supermarkets put eye-popping mark-ups on fresh herbs such as parsley and the small 25g bags are particularly bad value at £22-£32/kg. Supermarket parsley will also have been cut to fit in the plastic bag, which doesn't help with freshness. You can buy big, statuesque bunches of robust flat-leaf parsley for much less in Asian and Middle Eastern shops, good greengrocers and markets. Guide price: between £6.50 and £10/kg.

Joanna Blythman is the author of What To Eat (Fourth Estate, RRP £9.99). To order a copy for £7.99 with free UK p&p, go to guardianbookshop.co.uk

Based on Italian dumplings, or gnocchi, these make a delicious supper. If you have the time, a tomato sauce is the ideal accompaniment.

1 Preheat the oven to 150C/300F/gas mark 2. Prick the potatoes a few times, rub with olive oil and roll in salt. Bake for about 1½ hours, or until the inside is completely soft, then leave to cool.

2 While the potatoes are cooking, bring a pan of well-salted water to the boil. Once boiling, plunge in the parsley and cook for about 3 minutes. Rinse under cold water, then squeeze out and chop roughly. Puree with a tbsp of olive oil to a bright-green paste.

3 When the potatoes are cool enough to handle, peel them and pass through a potato ricer or sieve into a large bowl.

4 Add the flour, parmesan, egg yolk, parsley and oil. Season to taste and stir until the mixture forms a dough.

5 Bring a large pan of salted water to the boil. On a floured surface, divide then roll the dough into four long sausage shapes. Cut into 2cm pieces.

6 Once cut, drop the dumplings into the water. When they bob up to the surface, they're ready.

7 Meanwhile, heat the butter and remaining spoonful of olive oil in a pan large enough to hold the dumplings. Using a slotted spoon, transfer the cooked dumplings to the butter, then add the lemon zest and juice and season well. Serve immediately with plenty of parmesan.