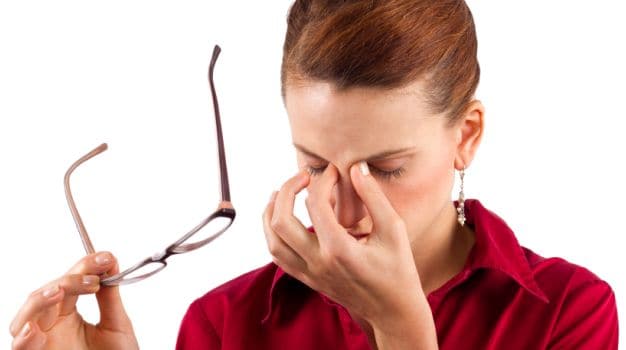 Do you have unexplained dry, irritated eyes? Blurred vision? Neck and back pain and headaches? If so, your digital gadgets may be (at least partly) to blame.

The results of a new survey released at the Consumer Electronics Show by the Vision Council, a trade group representing the nation's eyecare products, shows that most Americans are overexposing their eyes to technology. Nearly 90 percent said they spend two or more hours on a digital device each day, and many spend significantly more time on them. One in 10 reported spending at least 75 percent of their waking hours looking at a screen.

"Our eyes are not built to stare at digital screens all day," said Justin Bazan, medical adviser to the Vision Council.

Dora Adamopoulos, a medical adviser to the Vision Council and an optometrist at Eye2Eye Optometry Corner in Alexandria, Va., said in an interview that more and more young people have been coming in to her practice in recent years complaining that their eyes are tired, red, burning or feel as though they have sand in them.

"I'm getting the millennials coming in feeling symptoms you used to feel in your early 40s," she said. Often, all they need is to reduce their use of the devices, take frequent breaks and maybe get filtering lenses.

Adamopoulos said she was "really surprised" by just how much time people are spending on screens these days.

"When you really look at some of the data, children especially, and the length of time [they are] spending - and on not just one device but multiple devices - it's astounding," she said. In the report, many parents said they allow their children to use devices for three or more hours a day.

A person's risk for eye strain is determined by the frequency and duration of use of such devices, the use of multiple devices simultaneously and the proximity of the screen.

Computer, iPad and smartphone screens are thought to strain the eyes because they emit blue light or high-energy visible (HEV) light, which reaches far deeper into the eye than other kinds of light and can cause effects that are cumulative. Previous studies have shown that blue wavelengths that can boost attention and mood in the day can be disruptive at night, interrupting sleep patterns and circadian rhythms that scientists believe could play a role making people more vulnerable to chronic diseases.

The new report, based on a survey of 10,000 Americans, found that the way people use their digital devices and their risk for eye strain varies widely by age group - with those who are youngest being affected more than older generations.

The Vision Council offers these tips to relieve symptoms of digital eye strain:

4. "High-five" the screen for the correct viewing distance when sitting at a computer.

5. Increase text size on devices to better define content on the screen.