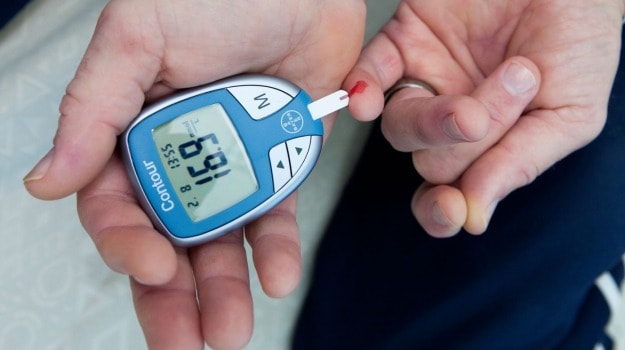 New compound, known as Ins-PBA-F, automatically activates when blood sugar levels soar, and remains in circulation for up to 24 hours

Diabetes patients could be spared the burden of constantly monitoring blood sugar levels after scientists have developed a "smart" form of insulin.

The new compound, which was shown to be effective in mice, automatically activates when blood sugar levels soar, and remains in circulation for up to 24 hours. In the future, patients could inject the insulin once a day, or even less frequently, overcoming the need for constant self-monitoring and insulin top-ups after meals.

Danny Chou, a chemical biologist who led the research at the University of Utah, said: "Diabetic patients still need to guess to some extent how much insulin they need. With this you would just inject it and it wouldn't matter if you overshot because its activity would stop when glucose levels get too low."

About 400,000 people in Britain have type 1 diabetes, including 30,000 children. The condition, which normally begins in childhood, is an autoimmune disease in which the body kills off all its pancreatic beta cells. The cells produce insulin, which regulates blood sugar, and without beta cells, the body's sugar levels fluctuate wildly, meaning that patients need to monitor glucose and typically inject insulin several times each day.

Taking too much insulin can drive blood sugar levels too low, leading to hypoglycaemia- such episodes are responsible for around 10% of deaths in type 1 diabetes.

Taking too little insulin means blood sugar levels are consistently too high, which can lead to serious complications in the long term, such as blindness and nerve damage. "In theory, with this there would be none of these glucose problems," said Dr Chou.

The smart insulin, known as Ins-PBA-F, is engineered to bind to a blood protein, called albumin, as soon as it is injected. This means it is essentially stored in a reservoir. The insulin is then released when blood sugar levels reach a certain threshold, meaning it can act to lower the circulating glucose.

In the study, published on Monday in the Proceedings of the National Academies of Science, diabetic mice given a single daily injection of the modified insulin had glucose levels that were as stable as those seen in healthy mice. The team hope to test the treatment in patients within two to five years.

Dr Richard Elliott, of Diabetes UK, said the approach had the potential to make it easier for people with diabetes to manage their condition, but cautioned that the progress towards clinical versions of the treatment could be slow. "Years of further research and clinical trials will be needed to find out if a similar drug could be used safely and effectively by people with diabetes," he said.

There are hopes that the new 'smart' insulin may ease the burden of patients having to constantly monitoring blood sugar levels. Photograph: Trevor Smith /Alamy