How the experts use salt in their cooking - and why 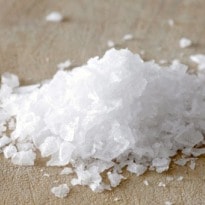 Ferran Adrià once declared salt "the only product that changes cuisine". This is because, as he and all seasoned cooks know, sodium chloride not only adds saltiness, which human beings innately adore (because we need it to live), but it also skews the overall flavour to positive effect. It makes food sing by suppressing bitterness, enhancing sweet and savoury, and turning up the volume on the aromas. But how on earth does it do all this?

The bitter-reducing ability of salt is a marvel. It is why coffee aficionados add an undetectable pinch to their grounds before brewing, says Barry Smith of London University's Centre for the Study of the Senses. And why a saline olive is the perfect bedfellow to the bitter, liquorice finish of a valpolicella. But it is not easy to uncover the precise mechanics of this culinary godsend, what with it occurring on a molecular level. We do know that it is a physiological phenomenon, rather than cognitive. Even if there isn't enough salt in our mouths for us to consciously taste it, the effect will still happen. And if you stimulate one side of the tongue with salt, and then put something bitter such as quinine on the other side, the salt will generally not suppress the bitterness. The two tastes have to be hitting the same receptors for it to work. Put very simply, we think that sodium molecules turn down bitter responses in the receptors.

The above process has a role in bringing out sweetness, too. If a food has both bitter and sweet notes, the two tend to dampen perception of each other (this is a cognitive function, rather than something that's happening in the taste receptors). Paul Breslin of Rutgers University, who is pretty much the don when it comes to tasting science, gives the example of a grapefruit. Remember, the sweet and bitter notes will already be suppressing each other. "When I add salt to it," he says, "I then suppress some of the negative notes, like the bitter taste." By knocking the bitter down, the sweetness - "or other pleasant tastes, such as savoury," he adds - are released from their bitter shackles. So not only is the bitterness turned down, but the sweetness is turned up.

Salting out the aromas

Veteran food writer Jeffrey Steingarten, in his book The Man Who Ate Everything, wrote that salt magnifies the natural aromas in food. This concept has always flummoxed me, and I ask Breslin how this could possibly be. In fact, he replies, there are two ways in which salt affects the aroma (which is commonly said to account for 80% of overall flavour perception, although this is little more than a widely accepted guestimate).

Firstly, says Breslin, if you change the taste profile, it will interact with the aromas differently. We have "learned synergies" between tastes and smells. The smell of peanut butter goes with salt, strawberry and vanilla are associated with sugar, and so on. Returning to his fruit analogy, salting will "not only change the flavour profile by suppressing bitter, thereby bringing out sweet more. The sweet will go with the fruit flavours and maybe enhance or synergise with the fruit flavours."

In addition, when the salted surface is liquid, like on a melon or grapefruit, a thing called salting out occurs. The salt draws out more of the volatile molecules that give rise to the aroma. The salt effectively changes the vapour pressure, "and this can be measured on a machine", adds Breslin, conclusively.

Taking the above into account, it's easy to picture flavour as this great, heaving, living, breathing mass of complex chemical reactions, underlining the cookery advice that chefs dole out time and again: keep on tasting. However, there are rules of thumb, such as: never cook peas and broad beans in salted water unless you prefer their skin hard and cracked. And don't salt mushrooms before they're cooked, unless you actually want them limp and shrivelled.

Usually, observes Steingarten, "salt added at the table becomes the dominant flavour, doesn't bind the other tastes together and leaves you with a salty aftertaste." This is satisfying on chips (and in any case salting chips while they're cooking will render them soggy, too), but in a sauce or meat dish, you really need to get the salt circulating at the start of cooking to get the full benefit.

Florence Knight, chef at Polpetto in London and author of One: A Cook and Her Cupboard, adds a generous pinch of salt to pasta water once it has begun to boil and, she says, "I always add some of the pasta water to the sauce I am preparing. For me this is an essential step in making any good sauce." She also adds a pinch of salt to cake batter.

Do you have any other salting tips to add? Tell us below.

Photo: Sea salt ... how do you get the full benefit in your recipes? Photograph: Alamy