Why Cycling is Great for Everyone - Not Just Cyclists 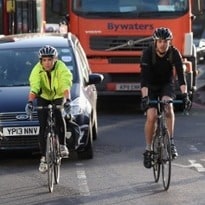 Mass cycling could save the NHS £17bn in 20 years, cut 500 road deaths a year and reduce smog, says a new study for British Cycling

At some point during most discussions about promoting cycling the question crops up: "Yeah, but some people don't want to cycle or can't cycle - how are bike lanes any use for them?"

The answers are many and overwhelming. However, they can be hard to pin down. Luckily, someone has just done just that in a thorough and easy to follow way.

That someone is Dr Rachel Aldred, a sociologist and expert on transport, particularly cycling, at the University of Westminster. She was commissioned by British Cycling to pore over studies from around the world and put together a list of all the potential benefits if, unexpectedly and overnight, the UK became a mass cycling nation in the vein of the Netherlands or Denmark.

The compact 24 page document, with an associated one-page infographic sheet (below), is released to mark today's debate in parliament about the progress, or lack thereof, in implementing the sensible, if unambitious, recommendations of last year's Get Britain Cycling report.

Let's ignore for now the somewhat pathetic actual progress made on cycling in Britain, and use Aldred's publication to conjure up an imagined future where 20% of trips are made by bike. Life would be much better for cyclists. If cycling were as safe in Britain as the Netherlands, she writes, this would save around 80 cyclists' lives a year. That's a lot. But it's just the beginning.

A move away from car trips soon brings more safety for all, not just cyclists - one study found a sufficiently big shift to bikes could save 500 road deaths a year.

Then, let's take public health. Britain, like many developed, car-centric nations, is facing an epidemic of illnesses associated with inactivity and obesity, not least type two diabetes, which experts say could soon bankrupt the entire NHS. Here's what Aldred concluded:

If people in urban England and Wales cycled and walked as much as people in Copenhagen, the NHS could save around £17bn within 20 years.

Shifting 10% of short urban trips from car to cycle, in English and Welsh urban areas outside London, could save over 100 premature deaths annually.

Fewer cars also means less noise. A Canadian study cited in the report found people living in the noisiest areas for vehicle noise suffered 22% more deaths from heart disease than those in the quietest areas.

Aldred also covers the issue of how mass cycling can promote wellbeing. It is, she notes, an area where more work is needed, but studies have found people who commute by bike are less stressed than those who do so by car. More widely, urban areas with less vehicle traffic tend to be more cohesive and neighbourly, other studies have found.

In a parallel way, better access to cycling can assist independence for younger people - almost half of Dutch primary school children ride to school against about 1% in the UK.

Bikes can also help older people avoid isolation, as well as stay mentally and physically healthy. When I met Aldred recently, she told me an astonishing statistic not included in her paper, that among the Dutch about 20% of those aged 80 to 84 regularly cycle.

But what of the economy, you cry! People need their cars to shop. Without a car culture, the high street would die. That's Eric Pickles' view, seemingly. Problem is, he's wrong. Forget even the Dutch this time. When New York City introduced segregated bike lanes recently there were widespread predictions of economic hardship along the routes. Instead, average trade rose by 24%.

Also on the economy, the paper notes that while traffic delays in London alone are estimated to cost £1.5bn a year, bike-based trips are much more predictable.

There is more, but I don't want to drone on too much. You can read the full paper yourself, with footnotes to the original studies.

These benefits are fairly well known, but written down together it's an astonishing case. Let's recap: a city or country where lots of people cycle is (much) healthier, and happier and more social, less isolated, less polluted, significantly safer, and more welcoming to human beings, notably the old and young. Why aren't we building hundreds of miles of safe, segregated bike lanes right now? Well, that's another debate.

Ultimately it's about what sort of society we wish to live in. I realise that's a slightly hubristic claim for someone writing about bike lanes, but stick with me. Let's look at a story the other week in the Rutland and Stamford Mercury about a local woman's safety campaign.

Mel Finnemore, a firefighter with two young children, has decided she wants to push for a law obliging all primary school pupils to wear high visibility jackets when they travel to and from school, to keep them safe from traffic. She told the paper she hopes to use people like paramedics and construction workers as a positive message:

I want to get the message across to children that it is 'hip and happening' to wear high visibility jackets.

Some children think horses are cool, others think that of bikes, so I'm trying to show them that it's cool to wear bright jackets like the professional men and women do.

There is, of course, a big difference: paramedics and construction staff are people whose work intrinsically involves a risky environment. Primary school children are just living their lives.

Is this really the world we want to create? Yes, around 1,500 pedestrians under 16 (plus about 300 child cyclists) are killed or seriously injured each year in Britain. But is the solution really to make children dress up as tiny firefighters or fun-sized paramedics to brave the car-centred chaos of a walk to school? Why not treat the absurdly hostile environment as the problem?

I can opine all I like on this blog and it won't change much. Only parliament can do that. Aldred's paper has been sent to every MP ahead of today's debate. Each one should read it. Each one should attend the debate. And then each one should make the short walk to the Department for Transport to demand, puce-faced and outraged, what the hell they're waiting for.

Ahead of today's debate the Department for Transport has just published its grandly-titled Cycling Delivery Plan, a supposed 10-year vision for boosting bike numbers in England. While only a draft, it's pretty disappointing - long on stirring words but with very little of note when it comes to actual ambition or cash. It seeks to increase spending on cycling to £10 per person per year by about 2020, and double the number of trips by bike by 2025. These are very limited aims.

Cycling charity the CTC has put out their response to the document, and it chimes with mine:

This is a derisory plan not a delivery plan. The prime minister's 'cycling revolution' with its Penny Farthing budget is going nowhere unless the chancellor finds funding for cycling in his autumn statement.

It seems we must wait longer for real political leadership on the issue.

The way it is now: cyclists in rush hour traffic near Waterloo Station in London. Photograph: Oli Scarff/Getty Images