Double Mastectomy for Breast Cancer 'Does not Boost Survival Chances' 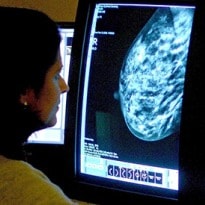 Women with breast cancer who opt for a double mastectomy to beat the disease do not increase their chances of survival, according to new research.

Having both breasts removed did not extend patients' lives any more than having cancerous lumps removed, followed by radiotherapy. The findings are based on a study of 189,734 women in California with the disease.

"We can now say that the average breast cancer patient who has bilateral mastectomy will have no better survival than the average patient who has lumpectomy plus radiation," said Dr Allison Kurian from Stanford University, the lead scientist for the project.

Ten years after having both breasts removed, 18.8% of women had died, compared with 16.8% of those who had a lumpectomy, then radiation. The paper was published in the Journal of the American Medical Association.

The double mastectomy has been the subject of discussion in recent years after celebrities including Hollywood star Angelina Jolie, former X Factor judge Sharon Osbourne and singer Michelle Heaton underwent the procedure as a preventive measure against breast cancer.

Kurian warned women against losing both their breasts unnecessarily. "A mastectomy is a major procedure that can require significant recovery time and may entail breast reconstruction, whereas a lumpectomy is much less invasive, with a shorter recovery period," she added.

The women in the study were diagnosed with breast cancer at stages zero, one, two or three in one breast in California between 1998 and 2011. During that time, more than half (55%) had surgery to remove malignant lumps then radiotherapy, almost 40% had one breast removed and the rest had a double mastectomy. Those who opted for that procedure were more likely to be white, aged under 40, better-off and have private medical insurance. The rate of women under 40 having the procedure soared from 3.6% in 1998 to 33% in 2011.

The NHS does not collect data on how many women have a double mastectomy for preventive reasons.

Eluned Hughes, head of public health at Breakthrough Breast Cancer, said far fewer women in the UK had the procedure compared with the US.

Lumpectomy plus radiotherapy is the standard treatment in Britain, unless doctors decide a bilateral mastectomy is the most advisable course clinically, for example if a woman has a family history of the disease or a gene variant that makes her much more likely to get it.

Any woman considering having one should carefully consider all the available evidence about the risks and benefits involved, Hughes said.

Some patients who lose their breasts are satisfied after the operation. But there are others who experience difficulties with their body image, sexual function and quality of life. Complications, such as getting an infection, are more common with a double mastectomy than other surgical procedures.

Martin Ledwick, the head information nurse at Cancer Research UK, said: "In the UK, a double mastectomy is not routinely offered to women with the most common forms of breast cancer when it's only in one breast. Usually women are offered surveillance with regular mammograms after their surgery.

"A double mastectomy is still considered an option for women with a high risk of breast cancer due to an inherited faulty gene", Ledwick added.

A Combination of Vitamin C and Antibiotics Can Kill Cancer Cells More Effectively, Say Experts
Water Kefir: Benefits Of This Vegan, Dairy-Free Probiotic Drink And How To Make It At Home