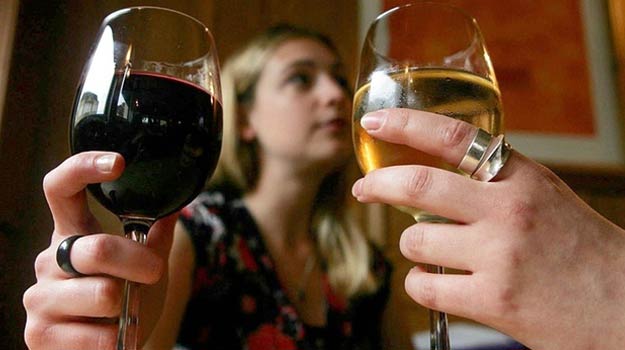 Women drinking glasses of wine. The research said the link between light drinking and breast cancer in women was the same whether or not they smoked. Photograph: Cathal McNaughton/PA

Drinking one glass of wine a day increases a woman's chances of getting breast cancer, according to new research.

Alcohol is a known risk for a number of cancers, including colorectal, liver, larynx and oesophageal cancer, and most attention has been paid to heavy drinking. A large study in the United States has now looked specifically at the link between alcohol and cancer in light to moderate drinkers.

The research, published online by the British Medical Journal, found that light drinking, defined as up to one standard drink a day for women and two drinks for men, was linked only to a minimal increase in risk of all cancers. However, a daily glass of wine raised the chances of breast cancer for women significantly " whether or not they smoked, since smoking is not linked to breast cancer.

The study defined one standard drink as containing 15g of alcohol, roughly equivalent to a 118ml glass of wine or a 355ml bottle of beer.

Among men who smoked, the risk of developing any cancer increased with a couple of drinks a day, but not in men who were non-smokers.

The study was carried out by a team of researchers based at Harvard TH Chan School of Public Health and Brigham and Women's Hospital in Boston. They used data from two large US studies " the Nurses Health Study for women and the Health Professionals Follow-up Study for men. These tracked the health of 88,084 women and 47,881 men for up to 30 years. The researchers assessed the risk of total cancer as well as known alcohol-related cancers including cancer of the the colorectum, female breast, liver, oral cavity, pharynx, larynx and oesophagus.

Related: Alcohol to blame for 13,000 cancer cases a year in UK

The link between drinking moderate amounts of alcohol and breast cancer was also identified by the Oxford University-based Million Women Study. They found there were 11 extra breast cancers for every 1000 women aged under 75 for each additional drink consumed per day. Although the increased risk might appear small, they said, the numbers of women who drink alcohol made it an important public health issue.

In a commentary published in the journal, Dr J"rgen Rehm at the Centre for Addiction and Mental Health in Toronto writes that the raised risk of certain cancers caused by light drinking is important. "Light to moderate drinking should be limited to no more than 10g of pure alcohol a day for women and 20g for men (roughly one standard drink a day for women and two standard drinks for men, as defined in most countries)," he says.

Prof Sir Ian Gilmore, chair of the Alcohol Health Alliance UK, called for health warnings on bottles of alcohol like those on cigarettes. "This research confirms the results of previous studies showing that there is no such thing as a safe level of drinking when it comes to the risk of cancer," he said.

"We know that the public are still largely unaware of the links between alcohol and cancer, particularly the increased risk of developing breast cancer. We all have a right to know what we are putting into our bodies and at the minute consumers are being denied this right. It's time that this changed; we need mandatory health warnings on alcohol labels so that people know the facts and can make an informed choice."