Ayushman Khurana Gave A Shoutout To This Indian Cheesecake From Odisha: Have You Tasted It Yet?

Ayushman Khurana was performing in Bhubaneshwar recently and he posted the picture of the chhena poda, popularly known as the Indian cheesecake. Have you tried it yet? 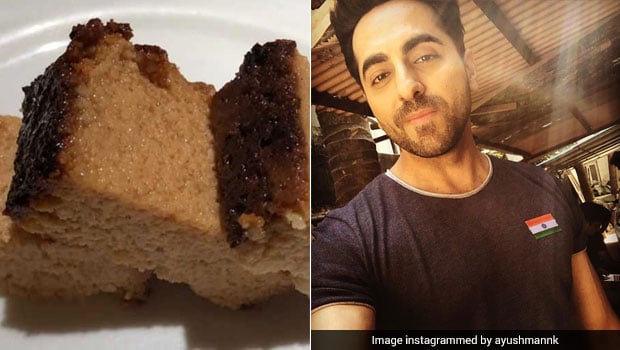 Highlights
Bollywood actor and singer Ayushman Khurana has been winning hearts all around with his heartfelt performances as very relatable characters in films like Meri Pyaari Bindu and Shubh Mangal Saavdhan. The charming lad, who made his debut in the film industry with Vicky Donor, will soon be seen opposite Dangal's Sanya Malhotra in their next flick, Badhai Ho. While we're looking forward to seeing Ayushman on the silver screen more often, he has been killing it on stage as well. Recently, Ayushman was in Bhubaneshwar in Odisha, performing with his band AyushmanBhava and it seems like he took some time out to indulge in some food as well.

Last night, Ayushman posted a snapshot of a plate of the delectable Odiya sweet chhena poda. Literally meaning roasted cheese, the chhena poda is a showstopper of a dessert and tastes absolutely amazing. However, very few even know about our very own homegrown cheesecake that is enjoyed by Odiya people around the world. It is customary for people coming from Bhubaneshwar, to carry along a box of the sweet, to gift to friends and relatives. (Also Read: Flavours of Odisha: What is a Traditional Odia Meal?)

However, preparing the chhena poda isn't as easy as making the Greek cheesecake. But the effort that goes into making it is worth the unique taste. What makes this dessert interesting is that it's traditionally wrapped in leaves of the sal tree and cooked in coal ovens. However, nowadays it's cooked in pressure cookers too and requires a lot of precision. It is made by binding chhena or cottage cheese, which is made from curdled milk, with semolina or sooji along with sugar, and then cardamom powder, raisins and roasted almonds are added for flavoring.

Have you tasted the chhena poda yet? We bet you want to try it out now!