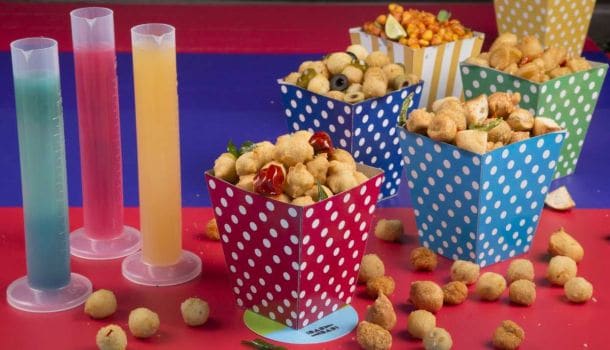 Cricket buffs rejoice. One of the most awaited matches of the year is here. Our men in blue are ready to take on the Pakistan team on 4th June, Sunday for the ongoing ICC Champion’s League. The ICC Champion's League is been held in England this year. In the world of cricket, the Champion’s League is considered to be the next big thing after the coveted ICC World Cup.  It is time to show some love and bleed blue as India gets ready for the most awaited match. To take the excitement up a notch, here are some of the best restaurant deals across Delhi-NCR and Mumbai that you can check out as you cheer for our team in full throttle.

Smaaash Champions Lounge in Cyber Hub has some king size arrangements. Bring in friends and family to join the frenzy with live screening, unlimited starters, soft drinks and coupons for 3 Beer/ IMFL at Rs. 999.

To celebrate one of the biggest cricket extravaganzas, ORO - The Bar at Radisson Blu Hotel brings you a special vegetarian platters, non-vegetarian platters and beer pints at Rs.900 onwards. So what if you couldn’t make it to England, witness the action-packed match screened live on HD at a bar decked in cricket theme so you don't feel far from your superstars. Where: Radisson Blu, Paschim Vihar, New Delhi
When: Sunday 4th June
Time: As per match schedules & package to be available only during match timings

Photo Credit: Radisson Blu, Paschim Vihar
3. Live India-Pakistan Champion’s League Extravaganza At The Darzi Bar and Kitchen
The Darzi Bar is making sure you celebrate each boundary hit by the Indian team, and each fallen wicket of the opposition team in style. They are offering a complimentary shot of your favourite spirit on a century, sixes and each time we get a Pakistan wicket. Now, that is going to be one cracker of a match.

4. India VS Pakistan Live at A Bar Called Life, Juhu

Gear up to spend your ideal Sunday evening cheering  for the men in blue at ‘A Bar Called Life’. Enjoy the special screening with a special package of unlimited domestic alcohol and 4 appetizers (a choice of 2 vegetarian and 2 non-vegetarian) from the set menu for the day only at INR 1499 plus taxes. Vegetarians can choose to savour options ranging from the Paneer Angara, Tandoori Paneer drizzled with Naga Bhoot Jolokia or the Loaded Nachos, generously slathered with cheese and toppings. Non-vegetarians can rejoice the appetizing Bhoot Wings, a signature dish of grilled chicken wings spiced with Naga Bhoot Jolokia or the Lal Mirch Ka Murg Tikka, chicken in red chilli marinade cooked in the tandoor.

5. The Big Screen at BAR BAR

See the temperatures soar as the cricket fever reaches its peak with the India-Pakistan match scheduled this Sunday. Catch the action live on a big screen with fabulous pocket-friendly offers on foods and drinks that’ll keep you going through the match. With three cocktails for Rs. 600 (250ml) and free food worth Rs. 1000, enjoy more but pay less.

British Brewing Company has your Sunday sorted with an exceptional beer deal for the match hours in their Andheri and Goregaon Outlet. For two hours, sip into the chilled beer for Rs. 599 (all-inclusive) per person, as you cheer for your team.

The White Owl Brewery is here to make your evening a whole lot better. Catch the sizzling India-Pakistan face off live their 200 inch HD screen, cheer the boys in all your might with unlimited servings of White Owl’s fresh handcrafted beer for a flat price of Rs. 795 only, exclusive of taxes.