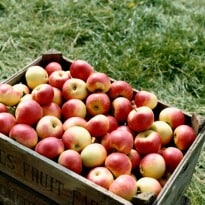 Global warming is causing apples to lose some of their crunch but is also making them sweeter, a study said Thursday.

Analysing data gathered from 1970 to 2010 at two orchards in Japan, a research team said there was clear evidence that climate change was having an effect on apple taste and texture.

"All such changes may have resulted from earlier blooming and higher temperatures" during the growth season, they wrote in the journal Nature Scientific Reports.

About 60 million tonnes of apples are produced every year, making it the world's third most popular fruit.

Previous studies had shown that global warming was causing apple trees to flower later, and that harvests were also affected by changes in rainfall and air temperature.

The orchards used in the study produce the Fuji and Tsugaru apples, the two most popular kinds in the world.

The farms are located in Japan's Nagano and Aomori prefectures, which had seen a mean air temperature rise of 0.31 and 0.34 degrees Celsius (0.5 and 0.6 degrees Fahrenheit), respectively, per decade. The orchards were chosen because there had been no changes in cultivars or management practices for extended periods, thus ruling out non-climate factors like technological improvements in the apple change.

"We think that a sweeter apple is a positive thing and a loss of firmness is a negative thing," study co-author Toshihiko Sugiura of the National Institute of Fruit Tree Science in Fujimoto told AFP.

"We think most people like sweet and firm apple fruits, although everyone has his own taste. A soft apple is called 'Boke' in Japanese which means a dull or senile fruit."

The study said that the results "suggest that the taste and textural attributes of apples in the market are undergoing change from a long-term perspective, even though consumers might not perceive these subtle change."

CommentsThe research claims to be the first to measure changes in the taste and texture of food as a result of climate change.