As Breast Milk Becomes an Industry, Worries Vie With Hopes 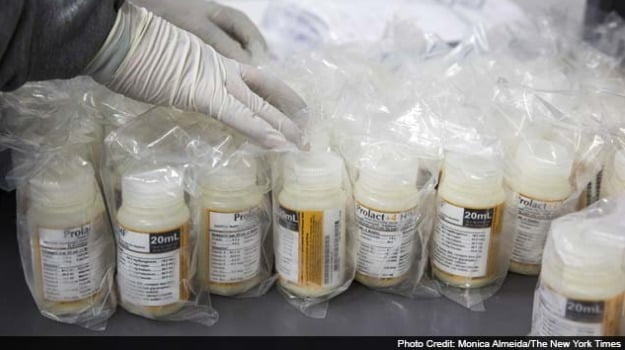 City of Industry, California: When Gretty Amaya took an unpaid maternity leave five months ago, she started what she calls a part-time job to help pay the bills. Amaya, who lives in Miami, has made more than $2,000 so far by pumping breast milk and selling what is left over after feeding her baby daughter.

Frozen milk from Amaya - and from hundreds of other women - is flown here to what resembles a pharmaceutical factory. Inside, it is concentrated into a high-protein product fed to extremely premature babies in neonatal intensive care units, at a cost of thousands of dollars a baby.

Breast milk, that most ancient and fundamental of nourishments, is becoming an industrial commodity, and one of the newest frontiers of the biotechnology industry - even as concerns abound over this fast-growing business. The company that owns the factory, Prolacta Bioscience, has received $46 million in investments from life science venture capitalists.

"This is white plasma," said Scott A. Elster, the company's chief executive.

He was comparing milk to blood plasma, which has long been collected from donors and made into valuable medical products like immune globulin, which helps fight infections, and clotting factors for hemophiliacs.

Concentrated milk could be just the start. Researchers say that breast milk, which evolved over eons to provide optimal nutrition and protect babies from infection, is brimming with potential therapeutics, not only for babies but possibly for adults, to treat intestinal or infectious diseases, like the bowel ailment known as Crohn's disease, for example.

"We are at the tip of the iceberg for milk," said Bruce German, director of the Foods for Health Institute at the University of California, Davis, and chairman of Evolve Biosystems.

Evolve and some other small companies like Glycosyn, Jennewein Biotechnologie and Glycom are trying to develop products based on complex sugars that are abundant in breast milk and that appear to nourish bacteria in the digestive tract that are important to health.

But the commercialization of breast milk makes many people uneasy. They worry that companies might capture most of the excess breast milk and make products that would be too costly for many babies, while leaving less milk available for nonprofit milk banks.

"The competition comes in the form of how much surplus breast milk is there in the country and who's getting it," said Kim Updegrove, executive director of the nonprofit Mothers' Milk Bank at Austin, Texas. "The nonprofit milk banks have a long history of providing milk to the sickest babies, and provide it based on medical need and not on insurance reimbursement or financial resources."

Debate is also intense over whether women should be paid for their milk or donate it altruistically. Opponents of payments, worried about breast milk "farming," say women might try to increase their milk output unsafely, hide health problems that could make the milk unsafe, mix in cow milk to increase volume or deprive their own babies so they can sell more.

When Medolac Laboratories, a competitor of Prolacta, said last year that it wanted to buy milk from women in Detroit, it was accused of profiting at the expense of black women.

"We are deeply concerned that women will be coerced into diverting milk that they would otherwise feed their own babies," the Black Mothers' Breastfeeding Association wrote in an open letter in January.

Medolac, which said it was working with the Clinton Foundation and wanted to encourage breast-feeding by making it financially attractive, abandoned its plan.

Defenders of payments say that if companies are going to profit, it is only fair for them to pay the suppliers for their raw material, especially since pumping takes considerable time and effort. (Prolacta, which started paying only last year, was accused previously of not making clear to women that their milk donations were going to a for-profit company). Moreover, they say, the commercialization of breast milk could increase the supply available.

The American Academy of Pediatrics says that because of the "potent benefits of human milk," all premature babies should receive breast milk, preferably from their mothers but if not, then from donors. But there is not enough donor milk for that, experts say, partly because many women do not know that they can donate or sell excess milk.

Elster said Prolacta processed 2.4 million ounces, or 18,750 gallons, of milk last year and aimed to do 3.4 million this year. That compares to the 3.1 million ounces dispensed in 2013 by all 18 nonprofit milk banks that belong to the Human Milk Banking Association of North America. Those milk banks do not pay women for milk but do charge hospitals a few dollars an ounce to cover the costs of screening donors and pasteurizing the milk.

Some women give milk directly to other mothers who need it, using milk-sharing sites like Eats on Feets. Some sell their milk to other mothers (or in some cases to male body builders who believe it builds muscle), through websites like Only the Breast, hoping to receive more than the $1 an ounce that Prolacta and Medolac pay. Some health authorities say direct sales or sharing pose risks because the milk is usually unpasteurized.

Prolacta's products are intended for extremely premature infants who weigh less than 1,250 grams, or 2.76 pounds, at birth, babies who can fit in the palm of a hand. Those babies need more nutrition than they can receive from breast milk alone.

Prolacta makes a fortifier containing high levels of protein, fats and minerals, which is used to supplement breast milk. It costs about $180 an ounce, and a baby would typically consume $10,000 worth over several weeks. Generally, the cost is paid by the hospital or insurers, not the parents.

Although the fortifier is vastly more expensive than formulas or fortifiers made from cow milk, Prolacta argues that it saves money in the long run. Clinical trials it has sponsored suggest that by allowing tiny babies to avoid cow proteins, its product reduces the incidence of necrotizing enterocolitis, a devastating and costly infection that can require the surgical removal of part of the intestine.

Elster said Prolacta, which is privately held and does not disclose its revenue, is growing 40 percent a year. He said its product was used by about 150 of the 900 neonatal intensive care units that care for these extreme preemies.

But not all doctors are persuaded, and others say that while they would like to use the product, it is too expensive.

"I've been stymied by the cost equation," said Dr. Jae H. Kim of the University of California, San Diego.

He said his hospital spends no more than $25,000 a year for donor milk for all babies. Adding Prolacta's fortifier for just the 50 to 70 extremely premature infants each year would cost more than $500,000.

Each batch of milk arriving at the $18 million factory here, outside Los Angeles, is tested for viral infections, nicotine, drugs of abuse, dilution and adulteration by cow's milk. The women who supply the milk take blood tests for infectious diseases, must provide notes from doctors saying they and their baby are healthy and must furnish DNA samples to verify that their milk came from them.

"Even the vitamins you take you have to report to them," Amaya said.

Prolacta now faces competition from its own founder, Elena Medo, who left in 2009 and started Medolac, which is based in Lake Oswego, Oregon. Prolacta sued Medo in January, accusing her of "absconding" with its customer list. Medo called the suit "extremely anticompetitive and certainly unjustified."

Medolac's first product, which it sells to hospitals, is donor milk that is sterilized rather than pasteurized, so it does not have to be frozen or refrigerated.

A third competitor could be Glenn Snow, who founded the milk-selling website Only the Breast. He has started a company, International Milk Bank, to buy the milk offered on that website and turn it into products for hospitals.

"It's a fascinating industry, and it's brand new," he said.

The next frontier could be the complex sugars in milk. Glycosyn, Jennewein and Glycom, which has worked with Nestlé, are trying to synthesize them to make products that would nurture a healthy gut "microbiome.'' Prolacta and Medolac say their ability to collect milk nationally will allow them to extract those sugars from the milk.

Until now, "there's never been enough milk in one place to be able to do it," Medo said.