Asda Disappointed With Findings From Study on Campylobacter in Chickens 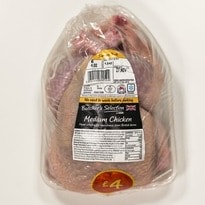 Asda has expressed its disappointment after it topped a supermarket league table for the presence of the food-poisoning bug campylobacter in fresh chickens.

Asda was the worst-performing retailer with 78% of its chickens taken to laboratories testing positive for poterntially lethal campylobacter in the first six months of a year-long study by the Food Standards Agency (FSA). Asda was followed by the Co-op (73%), and then Morrison's, Sainsbury's and Waitrose, all on 69%, with Marks & Spencer showing an incidence of 67% and Tesco the best at 64%.

"We take campylobacter seriously and it goes without saying that we're disappointed with these findings," said an Asda spokesperson. "Along with other retailers, we're working hard to find a solution."

At the same time, Britain's largest chicken processor warned against a hysterical response to the FSA findings, arguing a food scare that put shoppers off buying chicken could "consquently damage the UK's food and farming industries".

"If there was a scientifically proven intervention which would completely eradicate campylobacter, it would have already been implemented," said 2 Sisters Food Group, added that it had already put £10m into initiatives to tackle the problem and planned to invest more.

Asda also fared worst on a second measure that looked at the most heavily contaminated chickens - those its food scientists identified as having more than 1,000 colony-forming units of campylobacter per gram. Of the Asda chickens sampled 28% were in this bracket which the FSA considers most likely to infect consumers. The industry average was 18%.

Asda said last year it had launched "Roast in the Bag" chicken to remove the need to handle raw meat. It added that from next month it would start trialling SonoSteam, a new technology that is designed to kill campylobacter by blasting the chicken's skin with both steam and ultrasound. The supermarket will be doing this in partnership with its biggest poultry supplier Faccenda Foods.

The Co-op said it was also "testing new technologies to find a long-term solution", adding: "Food safety is an absolute priority for our business and we are working hard with our suppliers and farmers to tackle campylobacter in farms and during production."

The British Poultry Council (BPC) said the overall results of the study showed how "universal and challenging" the campylobacter problem was. "Poultry producers have looked at every part of their production chain to see where new ideas and technology can combat this very complex bacteria," said a spokesman.

The industry group said it hoped the combination of improved biosecurity on farms, new methods in the slaughterhouse and new technologies would help reduce the level of campylobacter in chickens over time.

Tesco was found to be leading the pack in the war on campylobacter. Just under two-thirds of its chickens were contaminated with the bug. Only 11% were heavily contaminated, putting Tesco in touching distance of the 10% target the FSA has set the industry for the end of 2015. No retailers are currently meeting this level.

Tesco said it would be co-funding the first trial of rapid surface chilling with one of its suppliers, in the early part of 2015. The retailler is also involved with schemes that incentivise poultry farmers for keeeping their flocks free of campylobacter.

Supermarkets have been rushing out plans to clean up their poultry supply chains ahead of the FSA announcement. Retailers are desperate to appear to be proactive as they face potentially damaging revelations, just weeks before the second anniversary of the horsemeat scandal that led to a collapse in sales of beef ready meals.

Campylobacter thrives in the gut and faeces of poultry and can easily be spread from bird to bird on farms or in abattoirs. The bug is killed by cooking but is easily spread when raw meat contaminates surfaces and utensils in the kitchen. It is the most common cause of food poisoning in the UK, making about 280,000 people ill each year and causing about 100 deaths.

Thursday's test results on chicken come after a decade-long campaign by the FSA to get supermarkets and the poultry industry to clean up their meat. But a Guardian investigation into industry hygiene lapses earlier this year revealed that the majority of fresh supermarket chicken remained contaminated with campylobacter.

Of the Asda chickens sampled, 28% were heavily contaminated with campylobacter. The industry average was 18%. Photograph: Sarah Lee for the Guardian