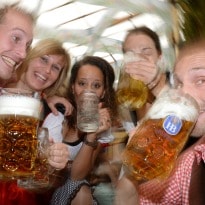 Single-minded revellers gathered for the world-famous Oktoberfest beer festival Saturday, hoping the heady atmosphere of ale, lederhosen and oompah music will not be flattened by Germany's election fever.

The first keg was opened for the 180th edition of Munich's Oktoberfest to the traditional cry of "O'zapft is" ("The keg is tapped") by Social Democrat mayor Christian Ude, flanked by Bavaria's conservative state premier Horst Seehofer.

But on the eve of close national elections, the two leaders from rival parties kept politics off the agenda as party-goers, many sporting traditional Bavarian costumes, kicked off the 16-day celebration of the amber nectar.

A day after Chancellor Angela Merkel rallied about 7,000 supporters in the city, a conservative heartland, for another four-year term, election posters were nowhere to be seen around the gigantic beer fest site near the heart of Munich.

"Today we forget everything, it's a party," retired nurse Gabriele Wahn, 65, from western Saarland state said, admitting she liked the atmosphere but did not drink beer.

"We're not talking about politics. Politics is only for tomorrow, for the vote," she added.

Inside a huge beer tent, the economic crisis which has divided politicians in the race for the chancellery is little in evidence -- waitresses in Bavaria's low-cut dirndl dresses and waiters in lederhosen leather shorts ferry litre-sized glasses, known as a Mass, of frothy beer up and down the aisles."The crisis? No, it hasn't affected me," said Thomas Peekl, a student from the wealthy neighbouring region of Baden-Wuerttemberg. "The German economy is solid," he added, saying he would vote on Sunday for Merkel's conservatives.

Masses of giant pretzels, pork, dumplings and other traditional Bavarian foods were being washed down with the beer.

"It's true, tomorrow we have to go and vote. That's why we're drinking one less beer -- just one, mind," joked Holger Arendt.

Seventeen-year-old student Maximilian Bissinger, from the outskirts of Munich, expressed shock at how many people showed no interest in politics ahead of the crunch election in which Merkel's coalition is fighting for every vote.

"Politicians want to be seen here, they want to appear close to the people. But people don't care. They are here for the beer," he said.

Although the Oktoberfest started life more than 200 years ago, this year's event is the 180th edition as the party was cancelled during two world wars, two cholera outbreaks, Napoleon's invasion of Bavaria and the hyperinflation of the 1920s.

The festival, which runs to October 6, was originally held in October as the name suggests to celebrate a royal wedding, but was brought forward by one month to take advantage of better weather.

CommentsThe format has been exported around the world and versions of the festival can be found as far afield as China, Brazil, Canada, the United States, Russia and Australia.