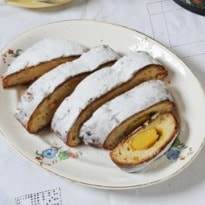 Winter baking practically demands the addition of warming ginger: here it's paired with white chocolate in a comforting Christmas bread and cinnamon and cloves in spiced biscuits.

Ginger is one of the few ingredients that is good in all its forms: sticky stem ginger, ground ginger, fiery fresh ginger, ginger in chewy, sugared chunks or candied in syrup to a mild sweet warmth. Though each has a slightly different flavour - some hotter, others more muted - they're all perfect to bake with. Typically, I'd add a heap of grated ginger to cakes batters, whereas drier biscuit and pastry mixes work better with the ground stuff. In bread, which relies on sensitive yeast for its rise, it's best to use chunks of sweetened ginger distributed through the dough.

These are a gentler alternative to the tooth-cracking gingerbread shapes - brittle biscuit, rock hard royal icing - so plentiful at this time of year. Lebkuchen are rich, soft and sweet, spiced and mistily glazed. Because these spread and rise as they bake, you won't be able to roll and cut the dough into fancy shapes, but who needs biscuits shaped like holly leaves, anyway? Ginger has a kick to it, but when combined with cinnamon and cloves, it yields a more complex flavour - fragrant, earthy and spicy. It's a trio that tastes of the essence of Christmas.

1 Preheat the oven to 180C/350F/gas mark 4 and line a couple of baking trays with baking parchment.

2 Rub the butter into the flour using your fingertips until no visible pieces of butter remain. The mixture should look like fine breadcrumbs. Stir in the ground almonds and sugar, followed by the baking powder, spices and salt.

3 In a separate bowl, whisk the egg yolks together with the golden syrup, then pour this into the flour mixture. Mash the wet and dry ingredients together with a fork until you're left with a smooth, slightly sticky dough.

3 Break off a conker-sized piece of dough and roll between your palms to produce a smooth ball. Place on the baking tray and flatten to a disc, roughly 1cm thick. Repeat with the remaining dough, spacing the biscuits a few centimetres apart on their trays.

4 Bake for 15 minutes, until risen, lightly browned and set. Swap oven shelves halfway through if not using a fan oven. The biscuits will be very soft when freshly baked, but will firm as they cool.

5 Glaze the biscuits while hot. Slowly whisk the water into the icing sugar until the mixture is smooth. Brush the glaze liberally over the biscuits and leave to cool completely on their trays.

It's easy enough to find a good, boozy Christmas pudding or a feathery pannetone in the shops, but I'm often left disappointed by stollen, at times too heavy or too light; bland or hyper-sweet. But when made at home, with a little patience and a watchful eye, stollen can be spectacular - rich with butter and egg, studded with chunks of ginger and sweet with zested marzipan.

This version sets hot ginger against the mellow sweetness of white chocolate, but you can mix and match flavours as you please. Dried fruit will yield a more traditional stollen, but you could also experiment with pistachios, dried sour cherries or dark chocolate chips.

1 Melt the butter over a low heat then set aside to cool slightly while you prepare the other ingredients. Combine the flour, yeast, sugar and salt in a large bowl. Pour in the milk and melted butter, then add the egg, vanilla extract half the lemon zest.

2 Beat the mixture in the bowl to combine, then tip it out on to a clean work surface and knead for 10 minutes or so. It'll start out very sticky, but thanks to the high proportion of butter, it should begin to feel silkier as you work it. Don't worry if it doesn't reach the smoothness or elasticity that you might expect from a normal bread dough.

3 After 10 minutes of kneading, add the stem ginger and white chocolate, and distribute the chunks through the dough using your hands. Return the dough to its bowl, cover with clingfilm and leave to rise at room temperature until 1½-2 times its original size. This could take as little as one hour if your kitchen is warm and the yeast lively, but be prepared to wait up to two hours on cooler days.

4 Tip the risen dough from its bowl on to a well-floured surface and pat/stretch it out to a rectangle roughly 20 x 30cm. Mash the remaining lemon zest and orange zest into the marzipan, then use your hands to mould it into a rough 30cm-long log shape. Lay the marzipan across one of the long edges of the dough then roll the dough up around the marzipan to form a fat roll. Pat the roll down to a squat, flattened shape and pinch the ends to secure the marzipan inside.

5 Leave the shaped stollen to rise on a baking tray, loosely covered with clingfilm, for an hour or until the bread has increased in size by half. Meanwhile, preheat the oven to 180C/350F/gas mark 4.

5 Bake the stollen for 40 minutes, until well-risen and golden brown.

6 Melt the remaining butter and brush liberally all over the still-hot stollen - both on top and underneath. (This is crucial for that characteristic tenderness, so don't forgo the extravagance). Repeat until all the butter has been absorbed into the stollen's crust. Dust generously with the icing sugar, then leave to cool completely. Serve in fat slices.